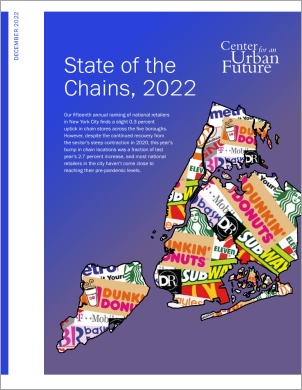 Our fifteenth annual ranking of national retailers in New York City finds a slight 0.3 percent uptick in chain stores across the five boroughs. However, despite the continued recovery from the sector’s steep contraction in 2020, this year’s bump in chain locations was a fraction of last year’s 2.7 percent increase.

The number of chain retail stores in New York City ticked up slightly over the past year, increasing by 0.3 percent. However, despite the continued recovery from the sector’s steep contraction in 2020, this year’s bump in chain locations was a fraction of last year’s 2.7 percent increase, and most national retailers in the city haven’t come close to reaching their pre-pandemic levels. In fact, the number of chain stores in the city in November 2022 was still 9.8 percent below the total from late 2019—or 782 fewer stores than before the pandemic.

The Center for an Urban Future’s fifteenth annual report tracking chain retail trends in New York finds that 57 percent of the retailers that were featured in our 2019 State of the Chains report have fewer locations today than they did before the pandemic, including 11 percent who no longer have any stores here. Additionally, all eight of the city’s largest chain retailers have fewer locations today than they did in 2019.

No borough has fully bounced back to its pre-pandemic chain store level, but Manhattan’s losses are significantly greater than those of any other borough—perhaps unsurprisingly, given diminished office occupancy. Today, there are still 14.4 percent fewer chain stores in Manhattan than in 2019—or 427 fewer stores. Staten Island (still down 1.5 percent) and Queens (6.8 percent lower today) have come the closest to reaching their pre-pandemic totals, while Brooklyn (-7.6 percent) and the Bronx (-9.5 percent) have further to go.

Over the past year, Brooklyn saw the largest one-year numerical increase in chain retailer locations, adding 33 stores—a 2.1 percent increase. Three of the four other boroughs experienced virtually no change in chain store locations between 2021 and 2022—Manhattan had a net gain of 3 chain stores (+0.1 percent), Queens added 4 locations (+0.2 percent), Staten Island experienced a contraction of 3 stores (-0.7 percent) while the Bronx had a net drop of 17 stores (-1.8 percent).

Although remote work and its effect on office occupancy levels in Midtown and other central business districts is a likely driver of the slow recovery in chain retail, our research suggests that the acceleration of online shopping is another factor. Indeed, for the fourth year in a row, chain retailers selling clothing, shoes, accessories, vitamins, and other merchandise have done worse than food retailers. The retail subsectors with the biggest year-over-year declines were all merchandisers: electronics (-8 percent), vitamin and food supplements (-7.8 percent), games and toys (-3.9 percent), beauty salons/equipment/supplies (-3.6 percent), pet supplies (-3.6 percent), office supplies (-3.1 percent), and shoes (-0.9 percent). Overall, 13 of the 19 chains that closed at least 10 percent of their stores in the past year were merchandise retailers. In contrast, a wide majority (19 of the 33 chains) that increased their footprint by at least 10 percent were food retailers.1

This year’s State of the Chains report, based on data compiled from store locators between November 8, 2022, and November 29, 2022, finds that most of the national retailers with the biggest footprints in New York either contracted or saw minimal growth in store locations since 2021. Of this year’s top 15 retailers, 6 have fewer stores this year, 3 registered no change and 6 had increases. Overall, the top 15 retailers recorded a net change of 41 fewer stores than last year.

Dunkin’ Donuts is again the retailer with the most stores in the five boroughs, a title it has held all fifteen years since we started tracking chain store trends in New York. But whereas in 2008, the first year that this report was published, Dunkin’ had just six more stores than the second-place chain (Subway), today Dunkin’ has over 300 more stores than the number two retailer in the city, Starbucks, which boasts 316 store locations. However, despite adding five stores over the past year, growing from 615 to 620 in total, Dunkin’ still has fewer store locations now than it did before the pandemic (636 in 2019).

Starbucks now has the second-most chain stores in New York, its highest position in the fifteen-year history of this report. Over the past year, Starbucks had a net increase of six stores, from 310 to 316. Although Starbucks still has significantly fewer locations than it did pre-pandemic (351 in 2019), the coffee chain moved into second position on our list by surpassing Metro by T-Mobile, which reduced its footprint in the city by 16 locations, from 311 to 295. 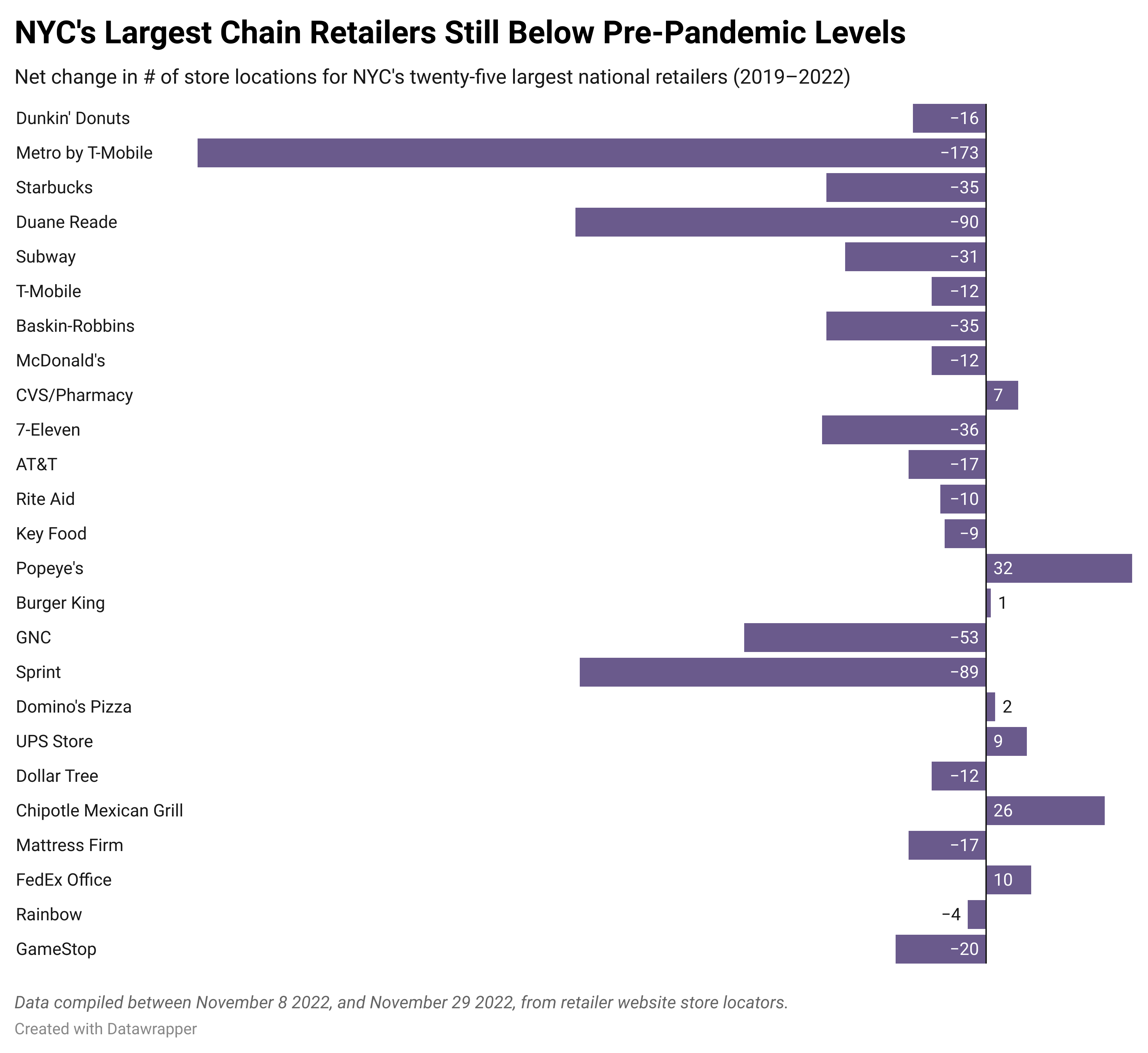 Retailers with Notable Changes Since the Pandemic

A majority of national retailers in our list still have fewer store locations than 2019, but some of the notable contractions since the pandemic include:

Several national retailers have bucked the larger trends and added a significant number of stores since 2019, including:

Starbucks has more stores in Manhattan than any other national retailer, with 191 total locations. In all other boroughs, Dunkin’ is the top retailer with 195 locations in Queens, 136 locations in Brooklyn, 90 locations in the Bronx, and 38 locations on Staten Island. 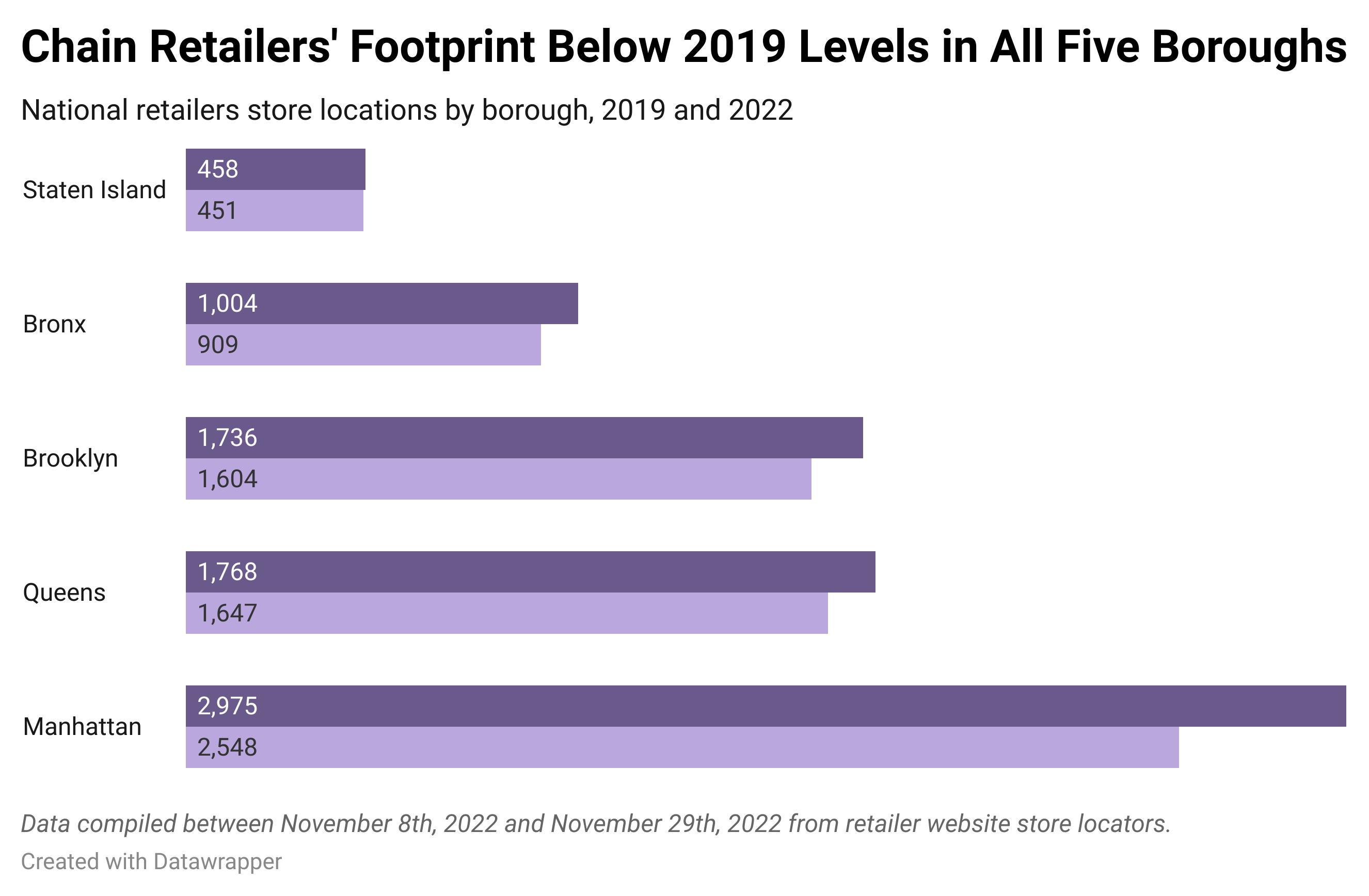 Of the 67 zip codes that saw a year-over-year increase from 2021 to 2022, 21 zip codes (31.3 per- cent) were located within Brooklyn. Queens just barely surpassed Manhattan, historically the leading borough in this statistic, with 20 zip codes seeing gains (29.9 percent), while Manhattan followed with 19 (28.3 percent), far less than the borough’s 33 such zip codes in 2021. In the Bronx, four zip codes (6 percent) saw increases in chain store locations, while Staten Island had 3 (4.5 percent).

Of all national retailer locations in New York City, 36.3 percent are located within Manhattan, a plurality that has held since the beginning of the State of the Chains reports. Queens ranks second with 22.7 percent, followed closely by Brooklyn which contains 22.2 percent of total chain store locations in the five boroughs. The Bronx contains 12.5 percent and 6.2 percent are in Staten Island.

This report is a publication of the Center for an Urban Future (CUF). Researched and written by Sophia Annabelle Klein, Charles Shaviro, and Jonathan Bowles. Edited by Eli Dvorkin.

An Uneven and Incomplete Recovery for NYC’s Economy in 2022

The Problem With Chain Stores

Rents Up, Availabilities Down In Manhattan Retail As Recovery Strengthens