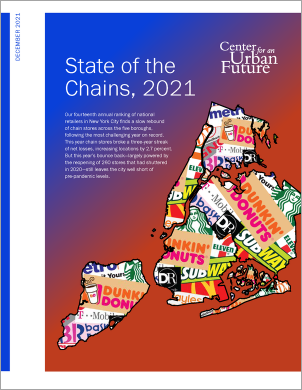 Our fourteenth annual ranking of national retailers in New York City finds a slow rebound of chain stores across the five boroughs, following the most challenging year on record. This year chain stores broke a three-year streak of net losses, increasing locations by 2.7 percent. But this year’s bounce back—largely powered by the reopening of 260 stores that had shuttered in 2020—still leaves the city well short of pre-pandemic levels.

by Sara Bellan and Charles Shaviro

Chain retailers began a slow return to New York City in 2021, adding 186 stores across the five boroughs as the pace of commercial activity picked up following the most challenging year on record. After 12.8 percent of chain retailer locations closed in 2020, the city saw a 2.7 percent increase in 2021, breaking a three-year streak of net losses in chain stores (before 2020, NYC lost 3.7 percent of locations in 2019 and 0.3 percent of locations in 2018). But this year’s bounce back—largely powered by the reopening of 260 stores that had shuttered in 2020—still leaves the city well short of pre-pandemic levels.

CUF’s fourteenth annual analysis of national retailer locations in New York City finds a number of encouraging signs for New York’s chain retail sector. Of the 1,021 store locations that shuttered in 2020, a little over a quarter (260) reopened in 2021. Several retailers went beyond reopening locations that closed last year and actually exceeded their pre-pandemic store count—including Pret A Manger, Shake Shack, Insomnia Cookies, Papa Johns, and Kiehl’s. Meanwhile, far fewer national retailers shut down altogether this past year, with just eight chains closing all their stores in the city, compared to 27 last year.

In 2021, Manhattan saw the largest numerical gain in chain retailer locations, adding 86 stores—a 3.4 percent increase. This partially reverses the disastrous year for Manhattan-based chain stores in 2020, when the number of national retailer locations shrank by 17.4 percent. Staten Island saw the fastest rate of increase this year, with its chain store footprint jumping by 4.5 percent, or 19 stores. Brooklyn added 41 stores (+2.7 percent), Queens added 30 stores (+1.9 percent), and the Bronx added 10 stores (+1.1 percent). Manhattan, powered by re-openings, accounted for 46 percent of the growth in stores locations in 2021, after accounting for over half (51 percent) of closures in 2020. None of the boroughs was able to return to 2019 levels.

This year’s report, based on data compiled from store locators between October 20, 2021, and November 26, 2021, finds that while chain retailers’ total footprint expanded in 2021, the largest retailers in New York City were still feeling the effects of the pandemic and subsequent economic headwinds. Dunkin’, still the city’s largest retailer after shuttering 18 of its stores in 2020, opened or reopened 26 locations in 2021 while also closing a handful of additional outposts, resulting in a net increase of just one store across the five boroughs. Metro by T-Mobile (formerly MetroPCS), the second-largest chain retailer in the city, had a net decrease of 21 locations, despite reopening 11 stores this year. Of the top 10 largest retailers in New York City, four saw a year-over-year decrease in locations in 2021 (Metro by T-Mobile, Duane Reade, T-Mobile, and McDonald’s). In total, the retailers added just 12 stores, an average of just over 1 per retailer, as they grew by a mere 0.4 percent. 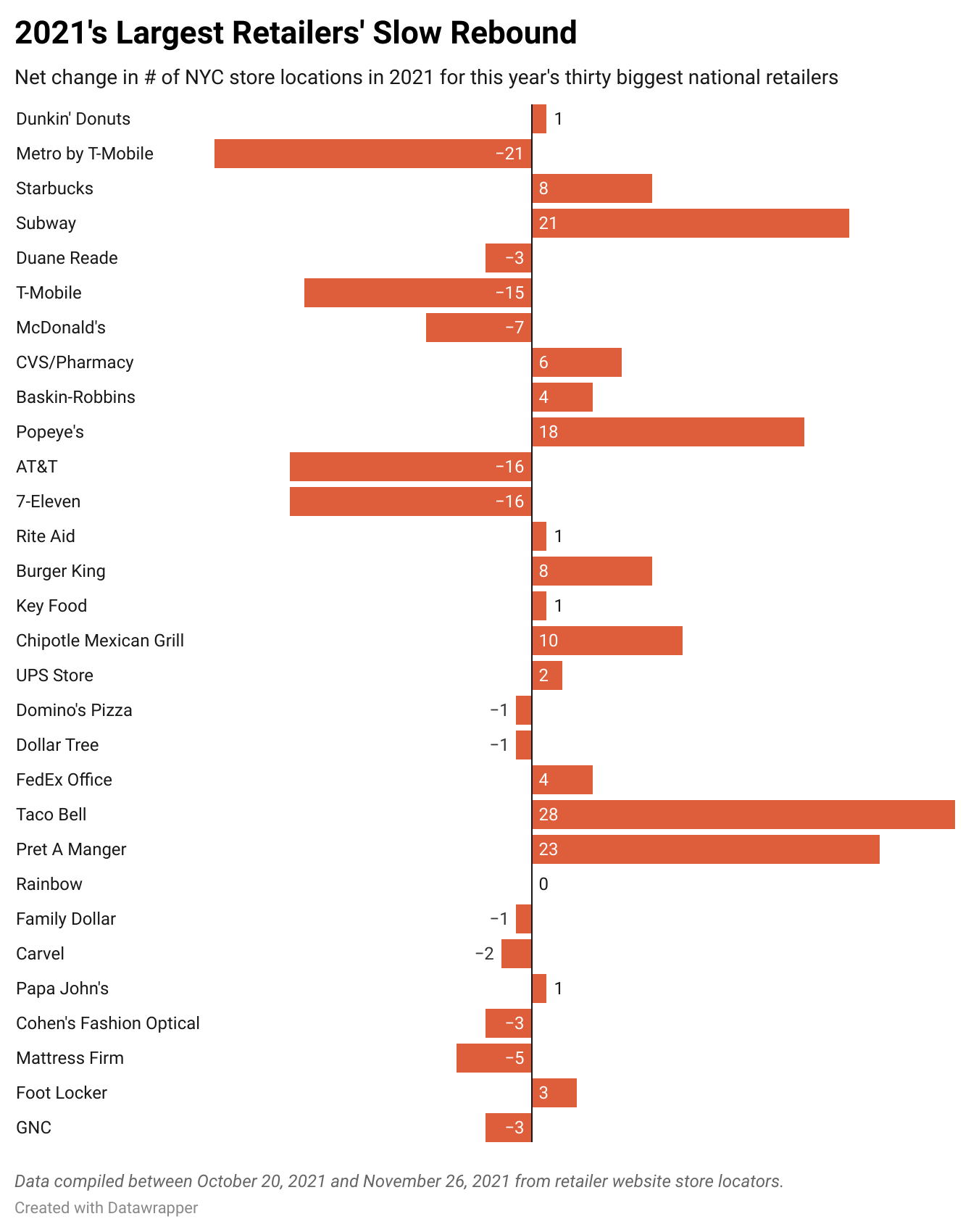 After last year’s record closures among sandwich shops, fast food burger chains, ice cream and yogurt chains, and health and exercise studios, 2021 saw the reopening of many stores in these industries. Many of the sectors that had significant declines in 2020 seem to be on the road to economic recovery, although very few are matching 2019 numbers:

Different sectors such as beauty and pizza saw substantial increases, some even surpassing 2019 numbers in locations: 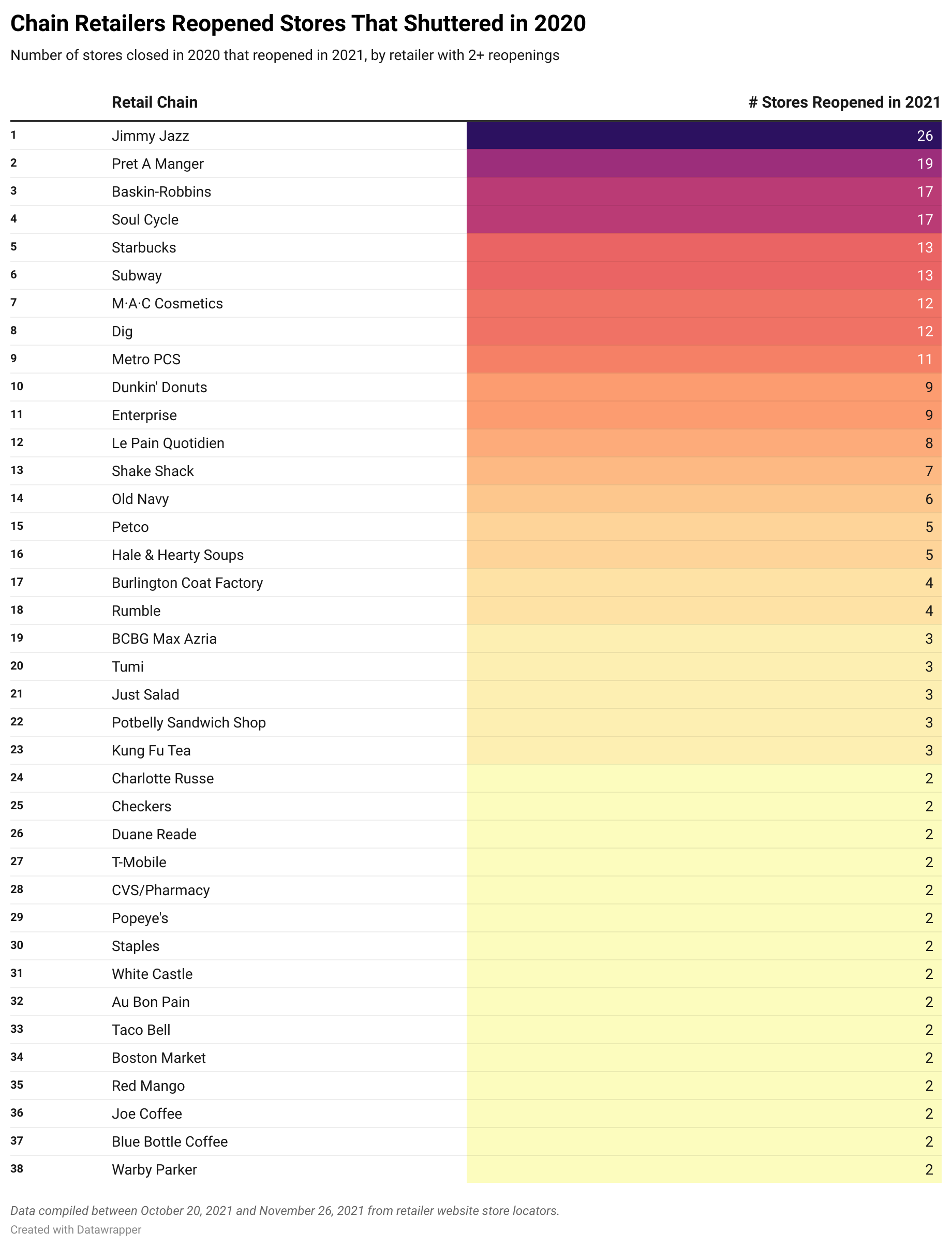 For the fourteenth consecutive year, Dunkin’ tops our list as the largest national retailer in New York City, with a total of 619 locations, a net increase of one store since 2020. Metro by T-Mobile remains the second-largest national retailer in the city at 312 stores, with a decrease of 22 stores since 2020, likely due to continued consolidations with parent company T-Mobile. Starbucks rounds out the top three, with 310 locations and a net increase of 8 stores since 2020. Completing the top ten national retailers in New York are: Subway (with 278 stores), Duane Reade/Walgreens (250), T-Mobile (241), McDonald’s (191), CVS/Pharmacy (178), and Baskin-Robbins (175). There are 15 retailers with at least 100 stores across the five boroughs, up from 14 last year.

Starbucks has more stores in Manhattan than any other national retailer, with 187 total locations. In all other boroughs, Dunkin’ is the top retailer with 191 locations in Queens, 138 locations in Brooklyn, 89 locations in the Bronx, and 39 locations on Staten Island. Brooklyn and the Bronx share the same list of top three chain retailers: Dunkin’, Metro by T-Mobile, and T-Mobile. The top three retailers in Queens are Dunkin’, Metro by T-Mobile, and T-Mobile (the same three from 2020). Manhattan’s biggest three retailers are: Starbucks, Dunkin’, and Duane Reade. Finally, Staten Island’s top three are: Dunkin’, CVS/Pharmacy, and Subway.

Among the largest pharmacy chains, Duane Reade/Walgreens remains the top pharmacy in all five boroughs except Staten Island, where CVS/Pharmacy continues to take the top spot. After Dunkin’ (39), Subway remains the most popular fast-food chain in Staten Island with 18 locations. In Queens, Subway maintained its spot as the second-largest food chain at 72 stores, while Baskin Robbin’s numbers decreased to 62 locations across the borough. Once again, Starbucks was the largest food retailer in Manhattan, with Dunkin’ a close second at 162 locations. In Brooklyn, McDonalds maintained 50 locations between 2020 and 2021, the second-largest fast-food chain in the borough after Dunkin’. Similarly, in the Bronx, Subway was the second-highest food retailer at 41 locations, following Dunkin’s 89 locations, and just beating out McDonald’s’ 40 locations.

For the third consecutive year in our study, zip code 10001, home to the Hudson Yards development, as well as the Manhattan Mall and Herald Square shopping areas, claims the top spot for chain store locations with 183 stores. The area saw an increase of 18 stores, rising 11 percent from 165 stores in 2020 to 183 stores in 2021. In second place for the second year in a row was zip code 10314, home to the Staten Island Mall, with 158 stores (increasing from 153 in 2020). 10314 (New Springville) contains 35.7 percent of the total store locations located in Staten Island. Zip code 11201 (Brooklyn Heights) remained Brooklyn’s most dense with chain retailers at 148 store locations, an increase of 7 percent from 2020 which vaulted it up to the third spot. The zip code with the fourth most chain store locations was 10003 (East Village) at 142, just pacing zip code 10019 (Midtown West), which closed out the top five.

Of the 103 zip codes that saw a year-over-year increase from 2020 to 2021, a plurality (33 zip codes, 32 percent) were located within Manhattan, while Queens was a close second with 29 of them (28.2 percent). Brooklyn contained the third-highest number of zip codes that saw increases in chain store locations with 22, followed by the Bronx (12), and Staten Island (7).

Of all national retailer location in New York City, 36 percent are located within Manhattan, a plurality that has been held since the beginning of the State of the Chains reports. Queens ranks second with 23 percent. Brooklyn contains 22 percent of total chain store locations in NYC, while 13 percent are located in the Bronx and 6 percent are in Staten Island. Manhattan, Brooklyn, and Staten Island all saw an increase in their share of chain store locations between 2020 and 2021, while Queens and the Bronx saw a decrease.

Where The Change Is Occurring

This report is a publication of the Center for an Urban Future (CUF). Researched and written by Sara Bellan and Charles Shaviro and edited by Jonathan Bowles and Eli Dvorkin.

The Rise and Fall of the Drugstore Chains

Devin Gilmartin’s Canvas Stretches Over New York and Beyond