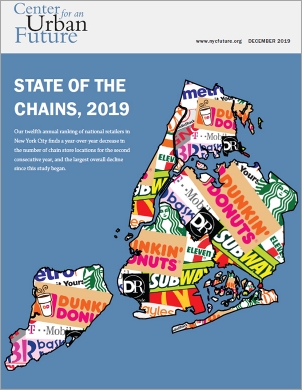 Our twelfth annual ranking of national retailers in New York City finds a year-over-year decrease in the number of chain store locations for the second consecutive year, and the largest overall decline since this study began.

by Marco Torres and Charles Shaviro

The number of chain stores in New York City declined by 3.7 percent over the past year, marking the largest year-over-year drop in national retail locations since the Center for an Urban Future began our annual analysis of the city’s chain retailers more than a decade ago.

Our twelfth annual analysis of national retailer locations in New York shows that the 316 retailers listed in last year’s ranking reduced their total footprint in New York City by 304 store locations, declining from a total of 8,136 stores in 2018 to 7,832 stores in 2019—a 3.7 percent decrease.

The slowdown is broadly spread among all five boroughs, led by Queens, where the number of chain store locations shrank by 4.9 percent—the sharpest single year decline to date—followed by Brooklyn (-4 percent), the Bronx (-3.8 percent), Manhattan (-3.1 percent), and Staten Island (-2.4 percent). This is the first year in which all five boroughs have registered declines.

Overall, our analysis also finds that more of the city’s chain retailers are shrinking than are growing. In 2019, a total of 114 retailers—36 percent of the 316 national retail companies tracked in our 2019 study—reduced their footprint over the past year. This compares to 76 retailers that registered a net gain in stores over the past year, and 126 retailers whose footprints remain unchanged.

We first observed significant declines in the number of national retail locations over the past two years, with most decreases concentrated among merchandise retailers: chain stores selling clothing, accessories, cosmetics, and other household supplies. Even amid that pullback, our research showed that food retailers continued to grow across the five boroughs through 2018. But this year we see notable declines among both merchandise retailers and food chains, with broad-based declines among fast food restaurants, pizza shops, juice bars, ice cream and yogurt chains, and bakeries. The difference is that many other national food chains have continued to expand in the city, while that generally has not been the case for merchandise retailers.

Facing growing competition from e-commerce, merchandise retailers selling clothing, shoes, accessories, jewelry, cosmetics, pet supplies, and vitamins also posted pronounced declines, driven by major store closures including shoe retailer Payless, which shuttered all 71 of its locations, after filing for bankruptcy in February of this year,2 and beauty supply and accessories chain Ricky’s (-12), which closed all but two of its New York City locations.3 Other notable declines include Mattress Firm (-20) and vitamin retailer GNC (-8).

Dunkin’ Donuts is the biggest national retailer in the city for the twelfth year running, with 636 locations, gaining 12 locations since last year. The second-largest retailer remains MetroPCS (now called Metro by T-Mobile, but retaining a distinct brand) with 468 locations, down from 471 last year, and followed by Starbucks with 351 locations, which increased its total by 24 locations since last year. Having bought out Duane Reade and acquired parts of Rite Aid,5 pharmacy giant Walgreens is now the fourth-largest retailer in New York City with 317 locations, while also posting the single largest gain in store locations among all retailers with 54 new stores. Notably, Rite Aid (-58) dropped significantly, as Walgreens closed or absorbed many of the pharmacy retailer’s locations.6 Rounding out the top 5 is Subway (-43), falling from third place a year ago, down to 287 locations.

The biggest gains by category were among coffee and tea shops, which added 45 stores citywide since last year. Among this group, only Argo Tea (-3) dropped in store locations, with Starbucks (+24), Dunkin’ Donuts (+12), Vivi Bubble Tea (+5), Gong Cha (+3), Kung Fu Tea (+2), Blue Bottle Coffee (+1), and Joe Coffee (+1) all adding locations. There were also notable gains among some beauty supply chains as well as gains for certain chain food retailers, with increases among a few traditional fast food restaurants, and continued growth by fast casual chains.

Last year’s fastest-growing sector, cellular telephone services, slowed this year, with only AT&T (+18) gaining in locations. Sprint (-17), T-Mobile (-7), Verizon Wireless (-5), and MetroPCS (-3), all declined. Eight retailers closed all of their locations within the five boroughs, for a net loss of 146 stores, with Payless Shoes (-71) and Petland Discounts (-60) accounting for most of this decline. Other retailers closing all locations in the city since last year: Avenue, Gymboree, Crabtree & Evelyn, Red Robin, Bebe, and FYE.

For the eleventh consecutive year, Dunkin’ Donuts tops our list as the largest national retailer in New York City, with a total of 636 stores, a net increase of 12 stores since 2018. MetroPCS is still the second-largest national retailer in the city, with 468 stores, despite losing 3 stores over the past year. Rounding out the top ten national retailers in New York are Starbucks (with 351 stores), Duane Reade/Walgreens (317), Subway (287), T-Mobile (245), Baskin-Robbins (217), McDonald’s (203), CVS (170) and 7-Eleven (141). There are 15 retailers with at least 100 stores across the city, down only 1 from last year.7

The number of chain stores decreased by 3.1 percent in Manhattan, which amounts to a loss of 91 locations. In contrast to last year, when Manhattan was the only borough to show decline, this year all five boroughs registered declines. Queens posted the sharpest drop with a 4.9 percent decrease in chain stores, for a net loss of 91 locations. Similarly, Brooklyn posted a 4 percent decline, losing 71 store locations. Last year’s two fastest-growing boroughs, the Bronx and Staten Island, each recorded significant decline in 2019 (-3.8 percent, or a loss of 40 stores in the Bronx, and -2.4 percent, or a loss of 11 stores on Staten Island).

Starbucks has more stores in Manhattan than any other national retailer, with 231 locations. MetroPCS has 159 locations in Brooklyn and 106 locations in the Bronx, making it the top retailer in both boroughs. In Queens, and on Staten Island, Dunkin’ Donuts retains its lead, with 194 locations and 36 locations, respectively. Among the large pharmacy chains, Duane Reade/Walgreens has become the top pharmacy in all boroughs except Staten Island, where CVS/Pharmacy remains at the top. After Dunkin’ Donuts, Subway remains the most popular fast food chain on Staten Island and in Queens;  Starbucks is top among all food retailers in Manhattan; in Brooklyn, McDonald’s total of 50 locations outpaces Subway’s 48.

Only 24 percent of chain retailers expanded their footprints over the past year. The following retailers experienced notable store growth since 2018:

This report was written by Marco Torres and Charles Shaviro, and edited by Eli Dvorkin.

‘Now, no one, nowhere’: Disappearing Duane Reades are part of a trend of vanishing local chains

Duane Reades Are Disappearing In NYC, Leaving Unexpected Nostalgia In Their Wake

‘I Love New York’ Is More Than a Motto

National retail chains closing at a rapid rate in NYC

Retailers stiff landlords in April, hoping to get better rent

Number of Chain Stores Continues to Decline Across NYC, Including Brooklyn

Five NYC Retail Chains Expand in 2019 While Others See Shrinkage

Retailers Turn to Personal Shoppers, Sidewalks to Win Back Business

How to work retail in the middle of the retail apocalypse

Rate of empty storefronts jumped by 45% - and it could get worse, report says

‘Now, no one, nowhere’: Disappearing Duane Reades are part of a trend of vanishing local chains
PIX11 New York

‘Now, no one, nowhere’: Disappearing Duane Reades are part of a trend of vanishing local chains
PIX11 New York