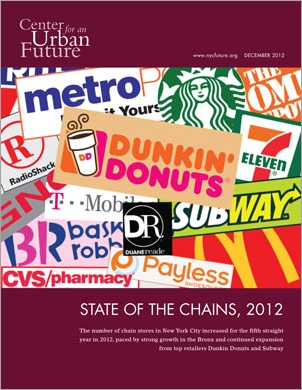 Our fifth annual ranking of national retailers in NYC shows that the number of chain stores in New York City increased for the fifth straight year in 2012, paced by strong growth in the Bronx and continued expansion from top retailers Dunkin Donuts and Subway.

Our fifth annual ranking of national retailers in New York City shows a 2.4 percent increase in the total number of chain stores over the past year, compared to a 1.8 percent gain in stores between 2010 and 2011. Although prominent retailers like Filene’s Basement and Betsey Johnson closed during the past year, fewer national retailers overall contracted—only 23.5 percent of the companies on our list reduced their retail footprint in the city, compared to 31 percent last year—and more expanded (29.1 percent of retailers had a net increase in stores vs. 28 percent in 2011). This marks the fifth straight year there has been a net increase in the number of national chain stores in the five boroughs.

Our analysis shows that the 310 retailers that were listed on last year’s ranking expanded from a total of 7,019 stores in 2011 to 7,190 stores in 2012, a 2.4 percent increase. (Overall, our ranking this year lists 306 national retailers, which have a total of 7,232 stores in the city. This total includes the stores from four retailers we included on our list for the first time this year and also reflects a handful of retailers that shut down over the past year.)

Over the past year, the number of national retail store locations grew in every borough but Staten Island, which had a 0.7 percent decrease. Of all the boroughs, the Bronx experienced the largest percentage increase in the number of retail locations (4.3 percent), going from 809 store locations in 2011 to 844 in 2012. It is the second consecutive year of rapid retail expansion in the Bronx, which had the second highest rate of growth (3.8 percent) of all the boroughs last year. Manhattan, which actually experienced a decrease in the number of store locations between 2010 and 2011, registered a 2.6 percent increase this year. Brooklyn (up 2.6 percent) and Queens (up 2.1 percent) also experienced gains in national retail stores over the past year.

For the fifth consecutive year, Dunkin Donuts tops our list as the largest national retailer in New York City, with a total of 484 stores. Over the past year, it had a net increase of 18 stores in the city (a 3.9 percent gain) and is on the precipice of becoming the first national retailer with 500 stores in the five boroughs. Subway remains the second largest retailer in the city and has 24 more stores than last year (a net gain of 5.6 percent over 2011). In 2010, Dunkin Donuts had 77 more stores than Subway, but this year the donut retailer only had 30 more stores. Starbucks registered a net gain of nine stores over the past year (a 3.4 percent increase) and regained its position as the third largest retailer in New York City, overtaking MetroPCS, which had moved up to the third spot last year. Starbucks also has the most stores in Manhattan, by far, with 200 of its 272 New York City locations in the borough.

Of the 10 largest national retailers in the city, T-Mobile added the most stores over the past year (13 – going from 161 to 174 stores overall) while GNC had the largest percentage growth (9.2 percent, going from 131 to 143 stores). Other retailers with notable increases over the past year include: Potbelly sandwich shop, which jumped from four stores in 2011 to 12 in 2012 (a 200 percent increase); Panera Bread, which went from eight stores last year to 13 this year (a 62.5 percent gain); 7-Eleven, which added 15 stores (from 83 to 98); and M.A.C. Cosmetics, which jumped from nine to 12 stores. In addition, Family Dollar added five stores over the past year and has grown from five stores in 2010 to 54 in 2012, with nearly half of those stores located in Brooklyn.

Like last year, there were only 14 retailers with more than 100 locations in the city. But two others, 7-Eleven (98 stores) and Sleepy’s (97 stores) are on the cusp.

Among the retailers with significant growth over the past year:

Among the retailers that contracted:

The New Springville zip code in Staten Island 10314 still has the largest number of chains of any other zip code in the city, most likely as a result of the Staten Island Mall being located there. Other zip codes with a large number of chains also have malls including 10001, the neighborhood in Midtown Manhattan that is home to the Manhattan Mall; 11373, the Corona/Elmhurst neighborhood home to the Queens Center Mall; 11234, which is home to Kings Plaza Shopping Center in Flatlands; and 11201, home to Fulton Mall in Downtown Brooklyn.

Behind the restaurant job boom

Well, Everyone Has to Pay Taxes

As more chains hit the city could mom and pop be in trouble?

Well, Everyone Has to Pay Taxes
The New York Times

Well, Everyone Has to Pay Taxes
The New York Times