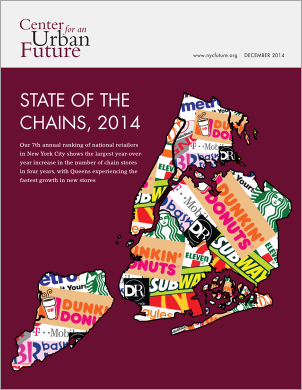 Our 7th annual ranking of national retailers in New York City shows the largest year-over-year increase in the number of chain stores in four years, with Queens experiencing the fastest growth in new stores.

Our analysis shows that the 309 retailers that were listed on last year’s ranking expanded their footprint in New York City from a total of 7,288 stores in 2013 to 7,473 stores in 2014, a 2.5 percent increase.1 This marks the sixth straight year there has been a net increase in the number of national chain stores in the five boroughs.

For the seventh consecutive year, Dunkin Donuts tops our list as the largest national retailer in New York City, with a total of 536 stores. Over the past year, Dunkin Donuts had a net increase of 21 stores in the city (a 4 percent gain). Subway is still the second largest national retailer in the city; gaining one additional store over last year’s total to make 462 locations across the five boroughs. Rounding out the top ten national retailers in New York are: Duane Reade/Walgreens (with 318 stores)2, metroPCS (290), Starbucks (280), McDonalds (243), Baskin Robbins (209), Rite Aid (200), T-Mobile (181) and GNC (156). In all, there are now 16 retailers with more than 100 stores across the city.

Almost a third of the 300 national retailers on this year’s list3 increased their footprint in the city by at least one store over the past year, compared to 29 percent last year, and 27 percent reduced their footprints since last year. A few national retailers, including Coldwater Creek, Submarina CA Subs, Gloria Jean’s Coffees, Juicy Couture and Goodburger closed all of their New York City locations since last year. The remaining 40 percent of retailers did not have a net change in the number of locations in the city.

Starbucks has more stores in Manhattan than any other national retailer, with 205 locations. In each of the other boroughs, Dunkin Donuts tops the list—it has 161 stores in Queens, 125 in Brooklyn, 79 in the Bronx and 31 on Staten Island.  Starbucks actually had a net loss of seven locations in Manhattan and one on Staten Island, and net increases in all the other boroughs.

Among the retailers with significant store growth over the past year:

Among the retailers that closed a number of stores over the past year:

Our report also charts retailer trends within the boroughs. Among the interesting trends we discovered this year:

Every year, we add new national retailers to our ranking. This year, we added five new retailers: Red Robin, 5 Napkin Burger, Chili's, Panda Express and Umami Burger. Including these new retailers, the complete list of 305 retailers has 7,481 store locations across the five boroughs.

Many zip codes also saw significant increases in the number of locations over the past year. The zip code with the largest year-over-year net increase was the Queens zip code covering JFK Airport, which gained 19 store locations, going from 40 stores in 2013 to 59 this year.  In Manhattan, the Gramercy Park zip code 10010 gained 8 stores, while in Brooklyn’s Flatbush/East Flatbush 11203 zip code gained 6 stores. In the Bronx, 10462 (Parkchester) gained five stores, while on Staten Island, Port Richmond 10302 and Pleasant Plains/Princess Bay 10309 both gained 3 stores, the most of any zip code in their respective boroughs.

1 Our tally of chain stores in New York City was conducted between July and August of 2014, and is based on each retailers’ store locator data taken at that time.

2 Duane Reade was purchased by Walgreens. Although there are still Duane Reade and Walgreens stores throughout the city, we counted all of these stores together.

This report was written by Christian González-Rivera and edited by Jonathan Bowles. Research by Betsy Allman, with additional research support from Jeremy Anderson and Eva Bein.

General operating support for Center for an Urban Future has been provided by the Bernard F. and Alva B. Gimbel Foundation and Fund for the City of New York.

Are Small NYC Retailers in Trouble?

The quest to save vanishing New York

The chain stores of New York

Biggest NY chain stores are not the ones you’d expect

In NYC, Debate Over Saving Small Shops Amid Chains’ Rise

By the numbers: National chains becoming a force in NYC

This Woman Photographed Every Bodega in Manhattan

Bodegas Declining in Manhattan as Rents Rise and Chains Grow

There Are More Dunkin Donuts Than Any Other Store in NYC

With Bronx Businesses Under Siege, A Bill to Stabilize Commercial Tenant Leases

The numbers of chain stores in New York City are growing, an annual survey reports

One Couple Is Documenting Every Vanishing Storefront in New York