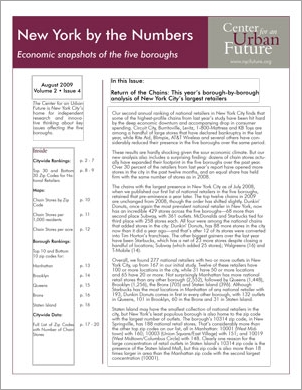 Return of the Chains

Our second annual ranking of national retailers in New York City finds that over 30 percent of the retailers from last year's report actually expanded their presence in the city in the past year, despite the sour economy. Dunkin' Donuts tops our list for the second straight year, with a staggering 429 stores. The list includes a breakdown of 277 national retailers that have two or more stores in NYC, broken down by every borough and zip code.


Retail chains show strength with growth in the city

Despite poor economy, nearly a third of top retailers expand in NYC

Little Chains That Could… And Still Do

Retailers Take a Chance on a Mall in the Bronx

Chain Gang! Or, Where The Chain Stores Are

NYC’s Chains Growing, Not Even Killer Economy Can Stop Them

Dunkin’ Donuts, other chain stores booming in city despite recession

New York City Continues to Turn Into Cleveland; News from the Center for an Urban Future

National retailers grow on Staten Island, in other boroughs

Chains Expand in NYC Despite Downturn

Vacant storefronts ending up in chains

New York City once repelled fast-food chains. Now it is their hottest market

Despite poor economy, nearly a third of top retailers expand in NYC
The Real Deal

Little Chains That Could… And Still Do
The New York Times

Despite poor economy, nearly a third of top retailers expand in NYC
The Real Deal

Little Chains That Could… And Still Do
The New York Times