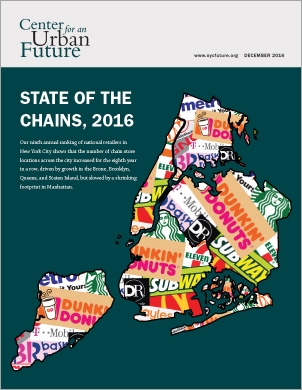 Our ninth annual ranking of national retailers in New York City shows that the number of chain store locations across the city increased for the eighth year in a row, driven by growth in the Bronx, Brooklyn, Queens, and Staten Island, but slowed by a shrinking footprint in Manhattan.

The ninth annual ranking of national retailers in New York City by the Center for an Urban Future (CUF) shows a 1.2 percent increase in the number of store locations over last year, an uptick from the 1 percent gain between 2014 and 2015.1 This is the eighth consecutive year with a net increase in national chain stores in the five boroughs.

CUF’s analysis shows that the 303 retailers listed in last year’s ranking expanded their footprint in New York City by 89 store locations, growing from a total of 7,154 stores in 2015 to 7,243 stores in 2016—an increase of 1.2 percent. Chains gained locations in the Bronx, Brooklyn, Queens, and Staten Island, while reducing their presence in Manhattan.

Only one out of every five national retailers on this year’s list increased their footprint in the city by at least one store over the past year, compared to one out of three last year. About a third closed locations in the past year, and the remaining third held the same number of stores as last year. Eleven national retailers closed all of their New York City locations since last year:

Although Manhattan still has more national retailer store locations than the other boroughs, the number of locations fell 0.9 percent in the past year from 2,739 locations in 2015 to 2,715 this year.

Starbucks has more stores in Manhattan than any other national retailer, with 223 locations. In each of the other boroughs, Dunkin Donuts tops the list—it has 179 stores in Queens, 157 in Manhattan, 138 in Brooklyn, 85 in the Bronx, and 37 on Staten Island.

The following retailers experienced significant store growth over the past year:

Increases in retailer locations by zip code were modest this year. The biggest increase was in the 10475 zip code in Baychester / Co-op City in the Bronx, which saw an increase of nine locations, followed by seven-location increases in 10018 (Manhattan Midtown West), 10314 (New Springville, Staten Island), 10451 (High Bridge / Morrisania in the Bronx), 11372 (Jackson Heights, Queens), 11212 (Brownsville, Brooklyn), and 11430 (JFK Airport).

1 CUF defines a “national retailer” as one that has at least two locations in New York City and at least one location outside the city limits.
2 The data for this report was compiled in July 2016.
3 Dollar Tree acquired the Deals chain in 2006, but only rebranded the locations at the beginning of 2016.

This report was written by Christian González-Rivera and edited by Eli Dvorkin. Research support from Mahalia Thomas.

Support for Center for an Urban Fu­ture has been provided by the Bernard F. and Alva B. Gimbel Foundation. We are also grateful for support from Fisher Brothers for CUF's Middle Class Jobs Project.

How many chain stores are there are on Staten Island?

Retail Chain Stores in Bushwick Are On the Rise, Report Indicates

Dunkin’ Donuts and Dollar Tree Stores are Proliferating in The Bronx

National chains ditch Manhattan and head for the outer boroughs

Somehow, It’s Even More Impossible for New Yorkers to Avoid Dunkin’ Donuts in 2016

Starbucks outrage boils over on Avenue A

Can’t pay up: Payless Shoes may shut down 1,000 stores

New York City once repelled fast-food chains. Now it is their hottest market

Retail Chain Stores in Bushwick Are On the Rise, Report Indicates
Bushwick Daily

Retail Chain Stores in Bushwick Are On the Rise, Report Indicates
Bushwick Daily