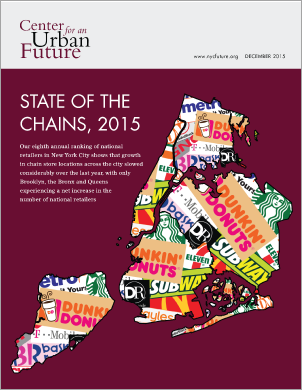 Our eighth annual ranking of national retailers in New York City shows that growth in chain store locations across the city slowed considerably over the last year, with only Brooklyn, the Bronx and Queens experiencing a net increase in the number of national retailers.

Our eighth annual ranking of national retailers in New York City shows that the growth in chain store locations across the city slowed considerably over the last year. Overall, there was a 1 percent increase in the number of national retail locations between 2014 and 2015, compared to a 2.5 percent gain between 2013 and 2014. While this is the seventh consecutive year with a net increase in national chain stores in the five boroughs, this year’s rate of growth was lower than all previous years except 2013—when the number of chain stores rose by 0.5 percent.

For the eighth consecutive year, Dunkin Donuts tops our list as the largest national retailer in New York City, with a total of 568 stores. Over the past year, Dunkin Donuts had a net increase of 32 stores in the city (a 6 percent gain). Amazingly, Dunkin Donuts now has 124 more store locations than any other retailer in the five boroughs.  Subway is still the second largest national retailer in the city, with 444 store locations, but it now has 18 fewer stores than last year. Rounding out the top ten national retailers in New York are: MetroPCS (with 323 stores), Duane Reade/Walgreens (307), Starbucks (307), McDonald's (232), T-Mobile (217), Baskin Robbins (214), Rite Aid (197), and GNC (175).2  In all, there are now 14 retailers with more than 100 stores across the city, a decrease from 16 retailers with at least that number last year.

A little over a third of the national retailers on this year’s list increased their footprint in the city by at least one store over the past year, about the same number as last year, and 30 percent reduced their footprints since last year. Five national retailers closed all of their New York City locations since last year: Baja Fresh, Ecko Unltd., Frederick’s of Hollywood, Montblanc, and Underground by Journeys. The remaining 37 percent of retailers did not have a net change in the number of locations in the city.

Starbucks has more stores in Manhattan than any other national retailer, with 220 locations. In each of the other boroughs, Dunkin Donuts tops the list—it has 171 stores in Queens, 149 in Manhattan, 135 in Brooklyn, 80 in the Bronx and 33 on Staten Island.

Among the retailers with significant store growth over the past year:

Among the retailers that closed a number of stores over the past year:

Our report also charts retailer trends within the boroughs. Among the interesting trends we discovered this year:

Every year, we add new national retailers to our ranking. This year, we added five new retailers: Joe Coffee, Soul Cycle, Blue Mercury, Maoz Vegetarian, and Dollar Tree. Including these new retailers, our complete list of 300 retailers3 has 7,626 store locations across the five boroughs.

Many zip codes also saw significant increases in the number of locations over the past year. The zip codes with the largest year-over-year net increases were the Baychester/Co-op City zip code 10475, which gained 20 retailer locations, closely followed by the Brooklyn zip code covering Canarsie, 11239, which gained 18 locations.  In Queens, Woodside 11377 and East Harlem 10029 in Manhattan each gained 8 locations, and Staten Island’s Tottenville 10307 zip code gained two stores, the most of any zip code in their respective boroughs.

1Our tally of chain stores in New York City was conducted between July and August of 2015, and is based on each retailers’ store locator data taken at that time.

2 Duane Reade was purchased by Walgreens. Although there are still Duane Reade and Walgreens stores throughout the city, we counted all of these stores together.

3 Last year, there were also 300 retailers on our list. Five retailers from last year’s list were removed this year because they closed all of their stores. But five new retailers were added.

This report was written by Christian González-Rivera and edited by Jonathan Bowles. Research support from Martin Yim and Jonah Bleckner.


NYC’s Most Ubiquitous Chain Is…

Chew on This: Fast Food Can Lead to Health Risks

10 Must Reads for the CRE Industry Today

How can cities save their small businesses?

The Rent Is Still Too Damn High: Zaro’s Shuttering Bronx Outpost After 56 Years

Surprises From 2015, and Reasons for Hope

Our Take: The State of the Chains

KFC going back to the Colonel’s fried chicken ways, reoutfitting stores and kitchens

Starbucks super-cafe, clash are both brewing

A New Kind of Grindhouse for the Meatpacking District

NYC’s Most Ubiquitous Chain Is…
Gothamist

Chew on This: Fast Food Can Lead to Health Risks
Norwood News

NYC’s Most Ubiquitous Chain Is…
Gothamist

Chew on This: Fast Food Can Lead to Health Risks
Norwood News