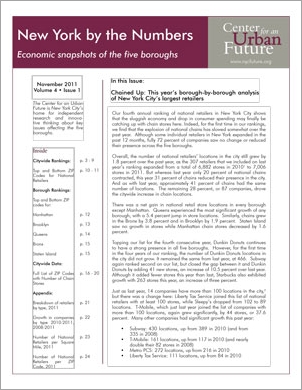 Our fourth annual ranking of national retailers in NYC shows that the growth of chain stores has slowed over the past year. While the number of chain stores is up by 1.6 percent over last year, more retailers reduced their presence in the city than expanded. And though Dunkin Donuts tops our list again, for the first time it did not have a net gain in stores.

Our fourth annual ranking of national retailers in New York City shows that the sluggish economy and drop in consumer spending may finally be catching up with chain stores here. Indeed, for the first time in our rankings, we find that the explosion of national chains has slowed somewhat over the past year.  Although some individual retailers in New York expanded in the past 12 months, fully 72 percent of companies saw no change or reduced their presence across the five boroughs.

Overall, the number of national retailers’ locations in the city still grew by 1.8 percent over the past year, as the 307 retailers that we included on last year’s ranking expanded from a total of 6,882 stores in 20101 to 7,006 stores in 2011. But whereas last year only 20 percent of national chains contracted, this year 31 percent of chains reduced their presence in the city. And as with last year, approximately 41 percent of chains had the same number of locations.  The remaining 28 percent, or 87 companies, drove the citywide increase in chain locations.

There was a net gain in national retail store locations in every borough except Manhattan.  Queens experienced the most significant growth of any borough, with a 5.4 percent jump in store locations.  Similarly, chains grew in the Bronx by 3.8 percent and in Brooklyn by 1.9 percent.  Staten Island saw no growth in stores while Manhattan chain stores decreased by 1.6 percent.

Topping our list for the fourth consecutive year, Dunkin Donuts continues to have a strong presence in all five boroughs.  However, for the first time in the four years of our ranking, the number of Dunkin Donuts locations in the city did not grow. It remained the same from last year, at 466.  Subway again ranked second on our list, but closed the gap between it and Dunkin Donuts by adding 41 new stores, an increase of 10.5 percent over last year.  Although it added fewer stores this year than last, Starbucks also exhibited growth with 263 stores this year, an increase of three percent.

Just as last year, 14 companies have more than 100 locations in the city,2 but there was a change here: Liberty Tax Service joined this list of national retailers with at least 100 stores, while Sleepy’s dropped from 102 to 89 locations.  T-Mobile, which just last year joined the list of companies with more than 100 locations, again grew significantly, by 44 stores, or 37.6 percent.  Many other companies had significant growth this past year:

Although several of these individual companies exhibited remarkable growth in the past year, 96 companies, or 31 percent, reduced their number of locations in the city.  A few notable examples include:

For the first time this year, we categorized the retailers included in the report by type.  We created 16 categories, such as “food and beverage,” which includes companies such as Starbucks and Chipotle, and “health, wellness and beauty,” which includes companies such as NY Sports Club, Supercuts, and Sephora.  Of all these categories, food and beverage makes up the largest portion of all stores, at 42.2 percent.  Apparel makes up the next largest portion, at 15.6 percent.  Pharmacies, such as Duane Reade and Rite Aid and larger department stores, such as Macy’s and Sears, comprise a much smaller portion of all store locations, at 9.1 percent and 1.1 percent, respectively.

However, some specific sectors saw remarkable growth in the past year and since 2008.  Cell phone company locations grew by over 18 percent this past year and by nearly 25 percent since 2008.

The number of chain locations continues to vary widely across neighborhoods.  Staten Island’s New Springville, in ZIP code 10314 continues to have the largest number of chains, likely due to the presence of the Staten Island Mall.  Notably, several other ZIP codes appearing on our top list for most chains, are also home to malls—10001, Garment District/Koreatown (Manhattan Mall); 11373, Corona/Elmhurst (Queens Center Mall); 11234, Flatlands (Kings Plaza Shopping Center); 11201, Downtown Brooklyn/Brooklyn Heights (Fulton Mall).  The remaining ZIP codes on our top list for sheer number of chains can be found later in this report.  Additionally, there are many ZIP codes that have no or very few chain stores, noted in our bottom list for ZIP codes with chains.

Overall, we found that there are 23 chain stores per square mile and 1,198 people to every chain citywide.  As would be expected, Manhattan has the densest geographic concentration of chain stores, at 113 per square mile.  In contrast, the other boroughs have fewer chains per square mile: Bronx (17), Brooklyn (16), Queens (14), Staten Island (7).

Manhattan To Get A Whole Lot More McDonald’s To Love

Dunkin’ Donuts Wants A Store On Every Corner

The total of national retail chain stores in New York City only grew 1.6% this year, down from 4% i

A battle for the boros

Where Bargains Go To Die: Syms And Filene’s Basement File For Bankruptcy

NYC runs on exactly the same amount of Dunkin’

MuniNet Medley: Timely Points of Interest from the Editor