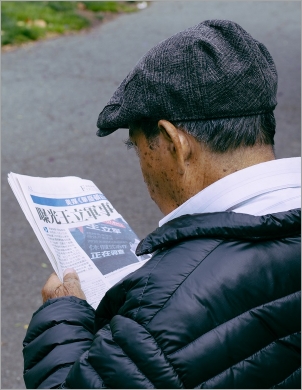 The growth in New York’s older immigrant population is far outpacing that of the U.S. born senior population. There are now more people over the age of 65 in the city than there are children ages 10 and younger. And for the first time since the end of World War II, the share of older New Yorkers who were born outside of the U.S. reached 49.5 percent—nearly equal to the native-born share.

Over the past five years, New York City’s senior population has reached three important milestones. The number of older New Yorkers has crossed the one million mark for the first time in the city’s history. There are now more people over the age of 65 in the city than there are children ages 10 and younger. And for the first time since the end of World War II, the share of older New Yorkers who were born outside of the U.S. reached 49.5 percent—nearly equal to the native-born share.

Although the graying of the population is happening across the country, New York City is unique in that the growth in the senior population is being driven almost entirely by the increase in immigration since 1965. Between 1980 and 2015, New York’s City’s foreign-born population grew by 1.6 million, or 95 percent. But while a whopping 95 percent of the city’s older immigrants came from Europe in 1950, today’s seniors are vastly more diverse. Now only 26 percent of older immigrants are from Europe, while 46 percent are from Latin America and the Caribbean and 23 percent are from Asia and Oceania.

The rich diversity of New York’s senior population reflects the city’s long history as a beacon to immigrants from around the world. But this diversity has significant implications for the way senior services are delivered. As a group, immigrant seniors are 1.5 times as likely as native-born seniors to be poor, and almost two out of three speak English less than very well. Immigrant seniors and their families are less likely than native-born seniors to receive critical social support services, and the nonprofit organizations that serve immigrant seniors tend to be smaller and less well-funded than those that serve the general senior population.

Our major findings include the following:

In the face of an increasing—and increasingly diverse—senior population, and facing aggressive cuts to senior services from Washington, the city may lack the resources required to meet the challenge. To its credit, the de Blasio administration has steadily increased funding for the city’s Department for the Aging (DFTA), which provides the main source of funds for senior services in the city. DFTA’s budget for fiscal year 2017 stands at $330 million, an increase of 25 percent since the current mayor took office. However, these recent increases merely bring DFTA’s budget back to 2008 levels. Overall, the agency’s budget is up just 5 percent since 2008, while the senior population increased 9 percent during that time. But serving a diverse and growing older population will require more resources and greater attention to the needs of the city’s cultural and linguistic communities.

This data brief updates the data we presented in our July 2013 report, The New Face of New York's Seniors, drawing on Census data to provide extensive demographic details about New York’s older immigrant population, including countries of origin, how long they have resided in the United States, which neighborhoods they live in, and how many have access to government assistance, among other findings. This brief is the latest in a series of Center for an Urban Future reports exploring New York’s growing immigrant population and the unique barriers to economic opportunity facing foreign-born residents.

Immigrants are driving the growth of New York City’s aging population
The number of city residents 65 and older is expected to grow by 35 percent over the next two decades, increasing from 12 to 15 percent of the city’s population. But within this larger demographic trend is an important but little noticed development: immigrants now make up nearly half of the city’s senior population and are driving nearly all of its growth. 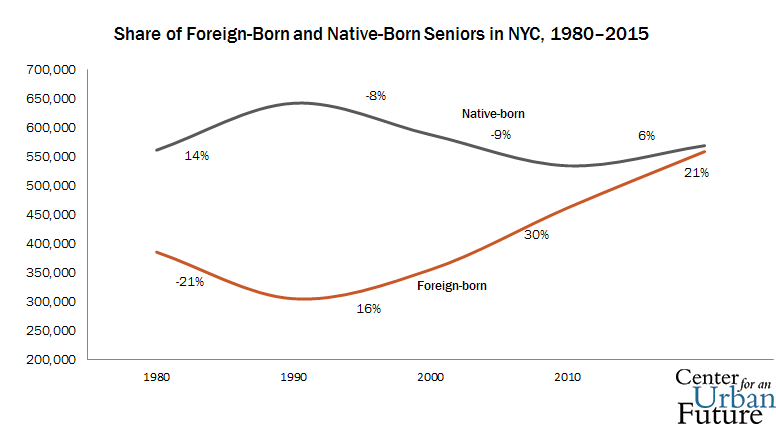 Since 2010, the senior populations of two more neighborhoods have become immigrant-majority: Williamsbridge/Baychester in the Bronx, which is in community district (CD) 12, and Sheepshead Bay / Gravesend in Brooklyn (CD 15). There are now 23 neighborhoods citywide—as defined by the U.S. Census’ Public Use Microdata Areas (PUMA)—where the number of immigrant seniors exceeds that of native-born seniors, including ten out of the 14 neighborhoods in Queens. In fact, immigrants are responsible for all of the growth in the senior population in 13 out of the city’s 55 Census-designated neighborhoods.

Since 2010, the senior populations of two more neighborhoods have become immigrant-majority: Williamsbridge/Baychester in the Bronx, which is in community district (CD) 12, and Sheepshead Bay / Gravesend in Brooklyn (CD 15). There are now 23 neighborhoods citywide—as defined by the U.S. Census’ Public Use Microdata Areas (PUMA)—where the number of immigrant seniors exceeds that of native-born seniors, including ten out of the 14 neighborhoods in Queens. In fact, immigrants are responsible for all of the growth in the senior population in 15 out of the city’s 55 Census-designated neighborhoods.

Most older immigrants came to the United States when they were younger and are now moving into the 65-plus age category. Only 8 percent of foreign-born older adults in New York City came to the U.S. when they were already over age 65. But this differs significantly by country or region of origin. For example, the average age at which a senior immigrant from the Middle East arrived in the U.S. is 28, and the average senior from Italy arrived at age 26, meaning that they have spent most of their working lives in this country. In contrast, the average senior  from Russia and the former Soviet Union arrived at age 49, the highest of any country or region of origin group. Not far behind are seniors from China and India, who arrived at age 46 on average.

Foreign-born older adults are more likely to be poor
Older immigrants are significantly poorer on average than native-born seniors, but poverty levels differ significantly by country or region of origin. Between 2010 and 2015 poverty among seniors overall increased one percentage point. Among older immigrants the share living below the federal poverty line increased from 21 to 22 percent and from 14 to 15 percent among native-born seniors. The most significant increase in the poverty rate was among seniors from sub-Saharan African countries, rising from 13 percent in 2010 to 26 percent in 2015. Poverty among seniors from Greece also increased significantly, from 10 to 22 percent. Poverty among seniors from Russia and the other former Soviet republics declined by one percent in the last five years, though at 42 percent, they are the poorest seniors of any country or region of origin group. Bucking this trend are Mexican seniors, who experienced an overall drop in the poverty rate from 44 percent in 2010 to 30 percent in 2015. While this is a significant drop in the poverty rate, Mexican seniors are still the third poorest group in the city.

In most cases, large changes in the population seem to be the cause of these big changes in the poverty rate. The Mexican senior population nearly doubled in the past five years while the number of seniors from sub-Saharan African countries increased 60 percent. The composition of the new entrants into the age group for each country or region of origin may be different from the existing composition. The data give some clues as to what those changes may be. For instance, in 2010 the average age at which a Mexican senior arrived in the U.S. was 46. By 2015 the average age had dropped to 36. The Mexico-born seniors who are entering the 65 and over age bracket seemed to have arrived in the U.S. at an earlier age than their predecessors, and may have had the opportunity to become more financially stable during their working years. 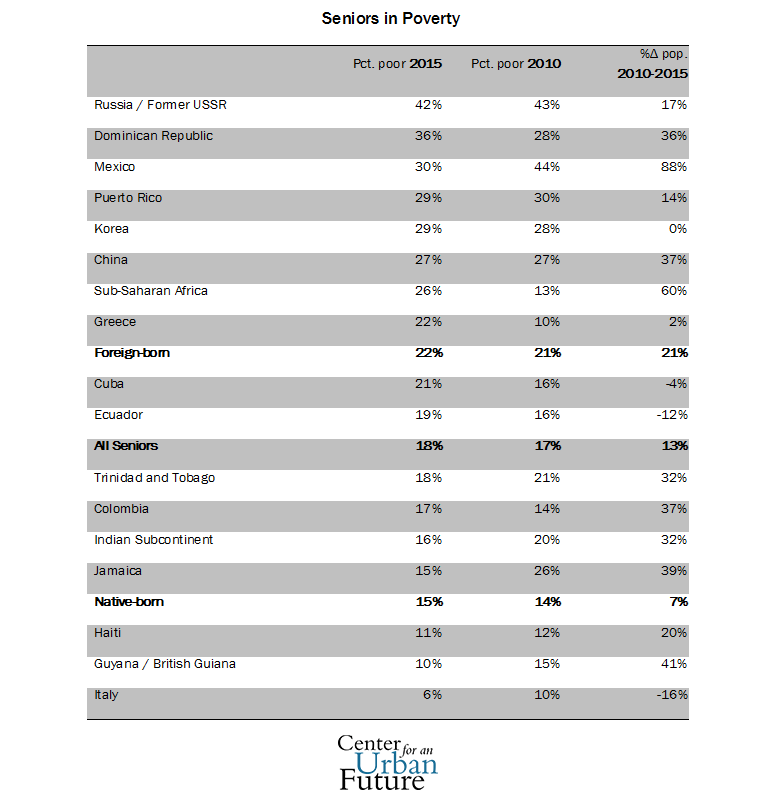 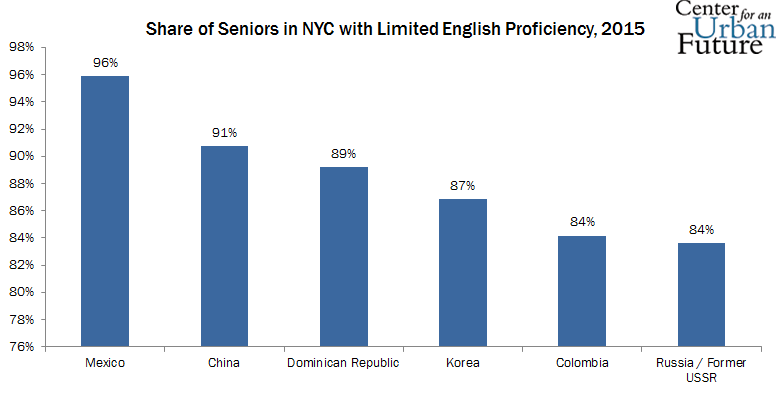 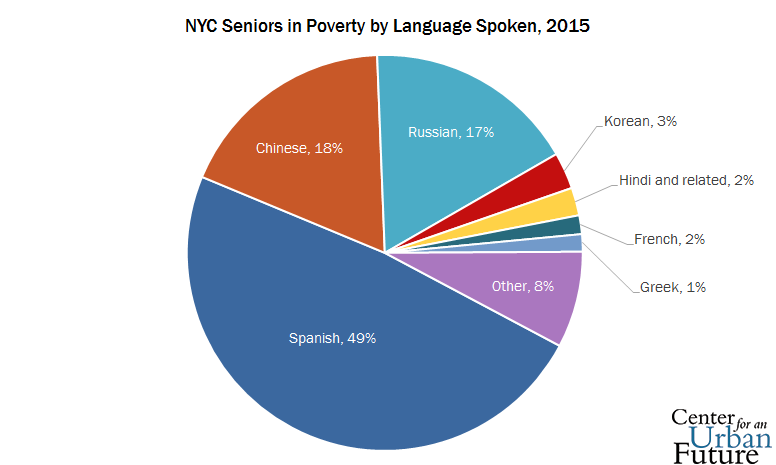 Explore the maps below to learn more about the immigrant senior population in each of New York's neighborhoods.

The Aging of the Mid-Hudson Valley

‘Life is too expensive here’: Senior immigrants in Flushing putting off retirement

U.S. Census: Number of grandparents will double by 2060

The number of foreign-born seniors living in Queens is rising: study

Immigrant seniors are aging in place all over New York City