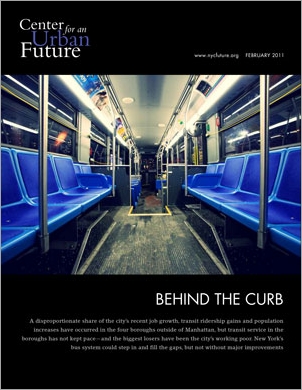 Although long, unpredictable commutes affect every income group, they present an especially big challenge for low-income residents. Higher earners with long commutes can buy a car or relocate to a more convenient neighborhood, but lower income New Yorkers can rarely afford these options. Indeed, skyrocketing real estate prices over the last decade have pushed numerous low- and middle-income residents to more affordable neighborhoods further away from Manhattan, many of which are not on subway lines. Also, for low-income workers, failing to be on time can mean trouble at work, since, unlike many white collar office jobs, most blue collar or low-income service jobs require that employees “time in.” Or it can mean paying extra at the day care center or losing an appointment at the doctor’s office. And for these reasons many of the participants in our interviews complained of long commutes but settled on the unpredictability of buses as an even bigger obstacle. “Buses are not trustworthy,” says Dwayne Clark, who until recently commuted from the Melrose section of the Bronx to Hunts Point, where he worked as a loader for a food distribution company. “They can be ahead of schedule or behind schedule; that’s the biggest inconvenience.”

Providing better bus service is not only an important quality-of-life issue for hundreds of thousands of New Yorkers; it’s a key component of the city’s continuing economic development. If New York is going to sustain the last decade’s incredible job growth in the boroughs outside of Manhattan, it will have to invest in solutions that make these less traditional commuter trips easier for passengers. Many employers we talked to said that a lack of transit access hampers their growth. Because the public transit service in their area couldn’t be depended on, several invested in shuttles or reimbursed workers for livery services. Others felt that a lack of transit access limited their pool of employees. For example, Steve Chen, the vice president of Crystal Windows and Doors, a manufacturer in northern Queens that has expanded rapidly in recent years, says that a lack of transit access in their area has exacted an undeniable toll on their business. “College Point has been advantageous for Crystal Windows in many ways,” says Chen, “but employee commuting to and from work by mass transit has unfortunately been a challenge. Improved mass transit would allow our expanding business to draw from a larger labor pool, improve our ability to attract and retain new workers and make us a more competitive manufacturer,” he says. 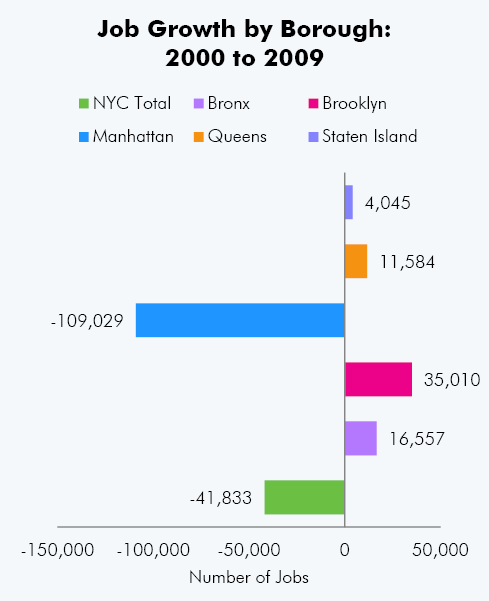 Other big job centers with less-than-adequate public transit service include Hunts Point in the Bronx with over 20,000 employees, JFK Airport in Queens with over 55,000 employees and the Kings County-SUNY Downstate medical campuses in Brooklyn with over 20,000 employees.“There are a number of places in the city where you are having a resurgence in industry and business that are not well served by public transit,” says Carl Hum, president of the Brooklyn Chamber of Commerce. “And we have got to figure that piece out, because if you want to sustain that growth you have got to have the transportation piece figured out.”

However, improving service on city buses presents a number of unique challenges. According to the DOT, New York City buses currently spend half of their running time stopped at red lights or at stations picking up passengers. Because buses operate in mixed traffic, a small delay can quickly snowball into a major one. Low-cost technical improvements like priority signaling at stop lights and prepaid boarding, if implemented correctly, can solve many of these problems, or at least lessen their effects. With prepaid boarding, for example, passengers pay at the bus stop and board through any of the doors, cutting the dwell time at bus stops by 40 percent or more. Similarly, with traffic-signal priority, buses can get extended green lights as they approach signals, reducing the time buses sit at red lights by 30 percent or more. Other improvements include time-arrival technology, which allows passengers to see real-time updates about when the next buses will arrive, dedicated lanes for buses and raised platforms at bus stops. In Curitiba, Brazil; Bogotá, Colombia; and Guangzhou, China, world-class bus systems employ all of these measures—and a few more—to create so-called Bus Rapid Transit (BRT) systems that function just like subways but for a tiny fraction of the cost.

Over the last two years, the MTA and DOT have started to implement several such BRT improvements along Fordham Road in the Bronx and along First and Second Avenues and 34th Street in Manhattan, and so far the results have been overwhelmingly positive. On Fordham Road, prepaid boarding, traffic-signal priority and a dedicated bus lane have reduced running times by 19 percent, while weekday ridership has increased by 11 percent or 5,000 daily passengers. The MTA and DOT are looking to implement similar improvements along two other corridors in Brooklyn and Staten Island and have studied the possibility of creating as many as 27 additional bus routes sometime in the future. Both agencies deserve credit for pursuing these projects in a tough fiscal environment. Nevertheless, transit experts say that to have any real impact on commute times, particularly for the working poor living outside of Manhattan, an even more ambitious effort is needed.

For instance, the MTA and DOT have decided not to build stations with elevated platforms because of the extra money and time required to build the physical infrastructure. This is a big deviation from many of the best BRT systems in other parts of the world, and many of the experts we spoke to thought it was a mistake. Elevated platforms, they argue, are necessary for reducing boarding delays and keeping drivers to a schedule. Transportation experts also think more can be done to connect the proposed BRT routes, facilitating transfers and building a more integrated network; right now, most of the routes exist in isolation from one another.

Similarly, of 32 proposed BRT routes, only a handful travel between the boroughs. Despite being notoriously difficult trips, not a single route will serve the growing number of commuters traveling between Brooklyn and Queens or Queens and the Bronx or Staten Island and New Jersey.

Finally, the MTA and DOT need to look seriously at outfitting every city bus with a Global Positioning System (GPS) in order to allow time arrival technologies to be implemented across the board. This would be a simple and relatively cheap way to help all bus riders better plan their trips, and it could help build good will among skeptical residents and businesses.

Is It Too Late To Change Our Manhattan-Centric Transportation?

Where Was The MTA?
Sheepshead Bites

Where Was The MTA?
Sheepshead Bites