Both agencies could undoubtedly do more, but the MTA and DOT don’t operate in a vacuum. If New York is going to reform its bus system and make a meaningful difference in the lives of commuters, then political leaders at both the city and state levels will have to step up too. Politicians will have to settle on a sustainable funding stream for the MTA and work to close the budget gap that has led to drastic cuts in service over the last year. They’ll also have to do a much better job of articulating the need for a better bus system and selling the advantages of BRT improvements like prepaid boarding and dedicated lanes to constituents.

Lawmakers, transportation planners and transit advocates should also reach out to community leaders and employers in underserved areas of the city to see what they might have to gain from improved bus service. In our interviews, we found a number of employers, including major hospitals, colleges and manufacturers, who could be powerful proponents of BRT if they saw that the proposed improvements were meeting their needs. “If we felt the improvements were working to our benefit, then we could be an advocate,” says Ivan Lisnitzer, chief operating officer of SUNY Downstate Medical Center in Brooklyn. “But so far,” Lisnitzer says, “nobody has asked for our input.” 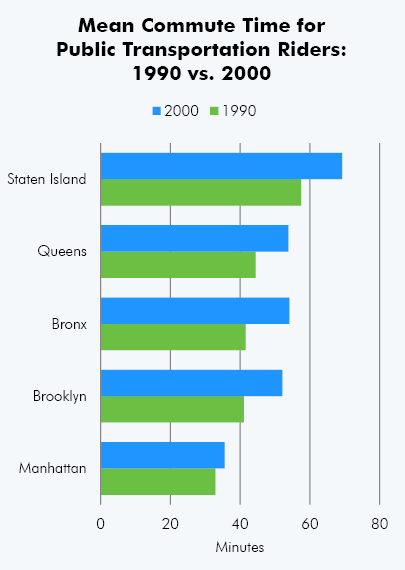 That needs to change. New York City’s transit system was once the envy of the world, and it will be again if legislators take the necessary steps to implement a sufficiently ambitious BRT network. Bringing BRT to New York is not only a cost-efficient way of responding to changes in the city’s economy and the different places residents are traveling for work; it will address the needs of working poor residents who are disproportionately affected by current gaps in the transit system.


Is It Too Late To Change Our Manhattan-Centric Transportation?

Is It Too Late To Change Our Manhattan-Centric Transportation?
Gothamist

If They Come, Will They Build It? The Need for Decentralized Transit
Next American City

Is It Too Late To Change Our Manhattan-Centric Transportation?
Gothamist

If They Come, Will They Build It? The Need for Decentralized Transit
Next American City