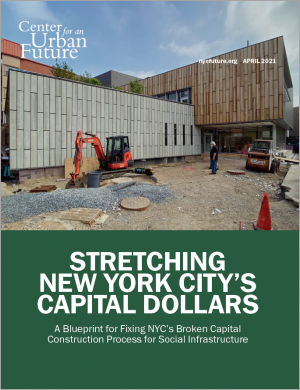 Investing in libraries, parks, and other social infrastructure will be essential to the city’s recovery, but inefficiencies that plague the capital construction process have led to unacceptable cost inflation. This report details how reforming this process could help the city potentially save hundreds of millions of dollars while enabling continued support for vital social infrastructure.

For the Next Mayor:

Make fixing the broken capital process a mayoral priority and a centerpiece of efforts to make city government more efficient in responding to crisis.

New York City’s next mayor should seize the massive opportunity to fix the city’s deeply flawed capital process, unleashing millions of dollars that currently go to waste to rebuild vital social infrastructure. Launching a full-scale reform effort is an immediate step the city can take to make government smarter and more cost-effective during this fiscal crisis—and ensure that limited city capital dollars stretch as far as possible. As the fallout from the pandemic strains vital social infrastructure including libraries, parks, and cultural institutions, cultivating an equitable recovery will require a new level of investment in these assets—even amid severe fiscal constraints. But this can only be accomplished by ensuring that limited capital dollars can stretch further and make a greater impact. As this report shows, simply leaving the responsibility to reform the capital process to DDC is not enough. Too many other parts of government need to initiate and follow through with bold reforms as well, and that’s unlikely to happen without a significant and sustained push from the mayor.  The next mayor should also send a clear signal to the next DDC commissioner that the agency’s nascent capital reforms should continue and expand.

Create a new Deputy Mayor for Infrastructure and charge them with executing a reform process involving every agency in the capital project process.

DDC deserves significant credit for reexamining its processes and enacting reforms to the city’s capital process. But the agency cannot go it alone: every single agency with a hand in the process—from OMB and the Comptroller’s Office, to the libraries and mayoral agencies, to the Procurement Policy Board, Fire Department, Department of Buildings, and Public Design Commission—should produce similar blueprints of action that identify sources of delay and redundancy and implement concrete steps to address them. To ensure that this interagency effort is successful, Mayor de Blasio or his successor should create a new Deputy Mayor of Infrastructure position in City Hall and charge them with developing and executing a full-scale reform effort across government. Using DDC’s strategic blueprint as an example, a larger citywide master plan should be formed, comprised of agency-specific reform plans and a wider effort to coordinate legislation at the city and state level that will support the goal of vastly improved project delivery.

No policy change will likely do more to reduce project delays and costs on city capital projects than reforming the state law mandating that publicly funded capital projects select the lowest bidder through a design-bid-build process. As this report concludes, these rigid requirements cost the city at least $100 million a year. Mayor de Blasio—and his successor—should make reforming the antiquated provisions of General Municipal Law 103 a key state legislative priority. State legislators and the governor should support efforts to revamp the law through legislation that allows a wide range of industry best practice procurement models, including construction-manager build and CM at-risk models; authorizing a full range of design-build practices; and allowing best-value contracting. Though perhaps counterintuitive, experts say the city can save millions of dollars that are wasted when work by subpar contractors has to be redone or bid out again, causing significant delays and major overruns.

Of all things that can be addressed solely by city government, reforming the change order approval process would have the greatest impact. This will require a continued push from DDC, and a new level of commitment from OMB, to embrace reforms to change order approvals. The two agencies must build upon the significant progress made in coordinating their efforts by codifying interagency coordination into practice, so no change order delays a project indefinitely. This means expanding the highly promising Expanded Work Allowance pilot—overseen by DDC, OMB, and the Comptroller’s Office—to all DDC-managed projects and to projects managed by other capital agencies, such as the Department of Parks and Recreation, as well as growing the “expense pot” allocated to cover costs ruled capitally ineligible to avoid costly delays.

In addition to the major role played by DDC, OMB, the Comptroller’s Office, and the mayoral offices, several other agencies contribute to lengthy delays through staggered, uncoordinated inspections and approvals. Mayor de Blasio—or his successor—should create a single, dedicated interagency inspection team to streamline these approvals, including the Fire Department, Department of Buildings, and other agencies where mandated.

Train and empower project managers to be much more proactive with sponsor agencies and contractors.

DDC should make significantly more progress in improving the performance of its project managers, who are critical to delivering projects on time and within budget. This report finds that too many of its project managers fall short when it comes to enforcing deadlines, navigating the approvals gauntlet, dealing with subpar vendors, and anticipating problems at other agencies before they occur. While the agency has already taken steps to train and coach its project management teams, more can be done.

DDC should ensure that candid feedback from sponsor agencies and vendors is considered through post-project assessments with architects, designers, contractors, and clients; in recent years, less than half of eligible projects completed post-construction surveys, which could help guarantee collaborative accountability. Post-construction satisfaction has also wavered around 50 percent or lower in that same timeframe. Furthermore, the agency should see that project managers receive consistent professional development on modern software tools and innovative management techniques; and that senior leaders are creating a culture in which project managers are expected to serve as the sponsor agency’s fiercest advocate.

Give libraries authority to self-manage a greater share of capital projects—and support them through a toolbox of build options.

When given the chance, sponsor agencies like libraries and cultural institutions can complete capital projects at a fraction of the time and cost of comparable DDC-managed projects. This results from sponsor agencies having a tighter grip over procurement and construction, with greater authority to push the process forward—or change vendors if results are lacking. However, sponsor agencies are currently allowed to self-manage only a small number of projects and lack the staffing and capacity to do more. Elected officials, including the next mayor, the five borough presidents, and members of the City Council can reap the rewards of more efficient capital projects by supporting increased expense funding for sponsor agencies. This funding can be used to plan and commence new projects outside of the city’s capital program, which will require additional staff, and to maintain enough cash on hand to keep projects on track when new costs arise, like building conditions that necessitate change orders or costs that stem from process-related delays.

With design-build authority extended to more DDC-managed projects as of January 2020, an equal effort should be made to provide sponsor agencies with a toolbox of alternative delivery options, like design- and construction-manager-build, for their own projects. Doing so would require state legislation to clarify these rules and expand use of these tools, as well as new guidance from OMB and the Comptroller’s Office.

Encourage sponsor agencies to commit to a project scope and budget at the outset of a capital project—and allocate sufficient expense and capital funding to ensure that long-term capital planning is possible.

New public buildings and major renovations are often funded piecemeal, with total project budgets cobbled together from a mix of mayoral, City Council, and private sources—often over the course of several years. At the same time, sponsor agencies have too often changed course during the design phase of a major project, broadening the scope and adding new elements long after a project is first initiated. These factors combine to extend project timelines and drive up costs, complicating the efforts of DDC and other agencies to improve project delivery.

As part of a citywide reform effort, sponsor agencies should commit to a project scope at the beginning of a major capital project and resist amending the scope whenever new funding is made available. City leaders can help ensure that this happens by including libraries and cultural institutions in a comprehensive capital budget that meets the real infrastructure needs of these institutions over the next ten years—including nearly $1 billion in documented, unmet needs at the libraries alone. In addition, the mayor and City Council should increase expense funding for libraries to build in-house capacity to self-manage capital projects. Expense dollars invested in this way will generate a significant return for New Yorkers, as capital costs are up to two-thirds lower when libraries have the ability to manage their own projects—meaning more projects can be completed with the same capital funding.

Stretching New York City's Capital Dollars is a publication of the Center for an Urban Future. Researched and written by John Surico and edited by Eli Dvorkin, Laird Gallagher, and Jonathan Bowles. Additional research by Naomi Weinblatt and Charles Shaviro.

Speeding Up NYC’s Capital Construction Process Could Save $200M Per Year: Report

How can NYC build back faster?

This study was made possible by the Charles H. Revson Foundation.