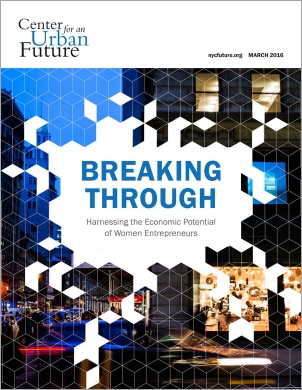 Women entrepreneurs of all ages, races and ethnicities are having an increasingly large impact on New York City’s economy. But even as the number of female-owned firms is soaring in every borough, the city has only begun to harness the full potential of women entrepreneurs.

The following are the recommendations from Breaking Through.

Women entrepreneurs have already become a major force in New York City’s economy, with the number of businesses founded by women on the rise in every sector of the city’s economy. Yet, New York—like virtually every other city in America—has only begun to tap the enormous potential of women entrepreneurs across the five boroughs. In the months and years ahead, there is a clear opportunity to expand the overall number of women entrepreneurs and also ensure that more women-owned businesses grow to the next level. Doing so will strengthen the city’s economy, create jobs and bolster neighborhoods across the city. While the de Blasio administration WE NYC initiative is a major step in the right direction, more could be done—by government as well as private industry and nonprofits. To that end, we propose the 22 achievable policy recommendations.

Develop New Initiatives to Help Existing Women-Owned Businesses Grow
Not every woman entrepreneur wants to expand her business, and many of the small-scale firms owned by women simply don’t have much potential for growth. But in a city where 91 percent of all businesses owned by women—376,000 in all—do not have any employees, there’s undoubtedly an opportunity to help scale up some of these enterprises. New York City has a number of good small business assistance programs, including initiatives run out of the Department of Small Business Services (SBS) and the Economic Development Corporation (NYCEDC), and others managed by nonprofit small business assistance providers. But the majority of these programs are focused on entrepreneurs starting new businesses. The de Blasio administration should refocus its toolkit of small business programs to include more initiatives that help existing businesses to grow. As part of this, it should also include some programs specifically focused on supporting the growth of women-owned businesses and make sure all programs are aggressively marketed to female entrepreneurs. Some specific ideas include:

Develop programs to support older women entrepreneurs
With the city’s population aging rapidly—the number of residents 65 years and over is expected to increase by 41 percent between 2010 and 2040—New York could be on the verge of a boom in older entrepreneurs. The biggest opportunity may be with older women. Indeed, today women account for 60 percent of all New Yorkers who are 65 and older—626,079 out of the city’s 1,046,671 seniors. The city’s Economic Development Corporation (EDC) and Department of Small Business Services should develop a new program to encourage and support older entrepreneurship across the five boroughs. They should also market existing programs for small business owners and entrepreneurs to older adults across the city, possibly through partnership with organizations that work closely with older New Yorkers, such as AARP.

Create incentives for banks and alternative lenders to make more small loans
While women entrepreneurs at all levels struggle to access capital, the experts we interviewed for this report told us that the biggest gap is for loans under $150,000. Microlenders are providing a number of very small loans at the bottom of this range—usually under $10,000. But many women-owned businesses are looking for loans of $50,000, $75,000 or $125,000. Unfortunately, there’s currently little incentive for banks to make loans at these levels. It costs the same for banks to process these small loans as it does for a $5 million loan, yet the profit potential is significantly lower and the risks are typically much higher. City, state and federal government officials should create new incentives that entice lenders to take a closer look at loans in this range. Some ideas include:

Ensure that more women entrepreneurs whose loan applications are rejected by banks get referred to a microlending institution for access to capital, credit building assistance and other business support services
Some of the experts we interviewed for this report told us that when a woman applying for a small business loan is turned down by a bank, they are less likely than men to come back to the bank later on and re-apply for a loan. Thus, it’s important for women entrepreneurs to learn about other, nontraditional lending opportunities that may be available to them, such as microloans. Banks can help by making it a standard practice to refer clients who have solid prospects but may not meet all their requirements to microlending institutions, which may be able to provide a small loan or work with the entrepreneur to improve their credit rating and gain financial management skills. In many ways it is in banks’ interest to make these referrals. After all, if they help a client get a microloan, the client is likely to set up various accounts with the bank. There’s also a good chance the client will be ready to come back for a traditional bank loan in a year or two, after developing a solid credit history with the microlending organization. But while many banks do make referrals to microfinance organizations, there’s clear potential to make the referrals more commonplace.

Recruit experienced women business owners and executives from every industry sector to be mentors
Virtually every entrepreneur we interviewed for this report cited the importance of mentors and the advice, industry knowledge and personal support they provide.  That includes lawyers, accountants and other professionals who may not provide overall management advice but can help new entrepreneurs avoid legal and financial missteps. But there have long been too few mentorship programs specifically geared towards female entrepreneurs, particularly in a number of high-growth industries. To its credit, the de Blasio administration is making clear progress in this area. It recently launched WEConnectMentors, an initiative in which women professionals will mentors female entrepreneurs across the five boroughs. In February 2016, the administration announced the first class of 17 WEConnectMentors, and it expects to add additional mentors in the months ahead. This is a tremendous start, but in a city with over 400,000 women-owned businesses, even more female mentors are needed. The de Blasio administration should expand on WEConnectMentors by partnering with industry trade associations to recruit executives and experienced entrepreneurs in a variety of sectors to serve as mentors to new entrepreneurs. For inspiration, it might look to San Francisco’s businessadvising.org, a non-profit that matches small business owners with advisors and mentors. SBS and other small business assistance intermediaries in the five boroughs should also look to expand partnerships with Business Mentor NY, an online mentorship matchmaking program run by Empire State Development.

Increase the number of women professionals involved in SCORE
Funded by the SBA, SCORE is a national network of experienced business executives and professional that provides free counseling to small business owners. But while SCORE is highly regarded for the quality of its advice and mentoring services, only nine of the 63 SCORE counselors in New York City (14 percent) are women. While there are other programs that provide mentoring services to business owners in New York, SCORE is one of the largest such providers, helping over 5,000 entrepreneurs last year. Given its important role in the ecosystem of small business counseling services, the New York chapter of SCORE should make it a priority to increase the number of female counselors.

Set a goal of doubling the number of women partners at New York City-based venture capital funds
Research suggests that women tech entrepreneurs would have better success in accessing venture funding if there were more women investors at VC firms. Women currently account for only seven percent of those working on the investment teams at the city’s 20 most active VC firms. The city’s VC firms should commit to at least doubling these numbers over the next two years, and take affirmative steps to reach those goals.

Increase the number of women investors
While the city’s venture firms undoubtedly should make efforts to increase the number of women partners, it’s also critical that more women become investors in the first place. As the ranks of women investors grow, it’s likely that more women founders will get funded. As one example, Joanne Wilson has made roughly 100 angel investments in the past few years and around 70 percent of them are in companies with women founders.

Build upon efforts already underway to increase the number of women working in the tech sector
While the number of female tech entrepreneurs is growing rapidly, it’s likely there will be significantly fewer women entrepreneurs in this part of the economy until women comprise a larger share of those working in the city’s tech sector. Women currently make up only 28 percent of those working in computer systems design, the largest of the industries that make up New York’s tech sector. They also account for a paltry 33 percent of the workforce in the city’s software publishing subsector and 38 percent in the data processing and hosting industry. Mayor de Blasio, philanthropic foundations and industry leaders should expand upon several of the promising efforts already underway that help girls and women—and other groups historically under-represented in the tech sector—develop the skills and credentials needed for tech careers.

This research was made possible through Capital One’s Future Edge initiative.

CAPITAL ONE'S FUTURE EDGE initiative is a $150 million, five-year effort to help more American workers and entrepreneurs succeed in the 21st century economy. Through Future Edge, Capital One works with hundreds of leading community and nonprofit organizations in NYC and beyond, including microfinance and micro-lending organizations empowering women entrepreneurs such as Grameen America, Accion, and the Business Outreach Center Network. Learn more at www.capitalone.com/investingforgood or join the conversation on Twitter at @YourFutureEdge.


Women entrepreneurs on a dramatic rise in NYC over past 5 years: Study

Study: Women-owned business on the rise in BX

The Commercial Appeal, by Kevin McKenzie and Kayleigh Skinner , March 03, 2016

How Dallas Is Fueling Success For Women Entrepreneurs

Top Cities Where Women Entrepreneurs Make the Most Money

For women entrepreneurs, business is booming but capital isn’t keeping up

What the Boom in Women-Owned Businesses Means for Cities

Ladies: Read This if You’re Thinking of Starting Your Own Business

More Women Are Opening Food Businesses Than Ever in New York, Study Says

Women-Owned Businesses Are Growing—but Not Enough

Female-owned businesses on the rise on Staten Island

Breaking Through: The Economic Impact Of Women Entrepreneurs

Atlanta No. 3 U.S. city for growth of women-owned businesses

My thoughts: Overcoming challenges and finding success as a female small business owner

Female founders are spearheading Atlanta’s transformation into a tech hub

Turning Oreo Cheesecake into Dough in the South Bronx

Women entrepreneurs on a dramatic rise in NYC over past 5 years: Study
Metro

Study: Women-owned business on the rise in BX
News 12

Women entrepreneurs on a dramatic rise in NYC over past 5 years: Study
Metro

Study: Women-owned business on the rise in BX
News 12