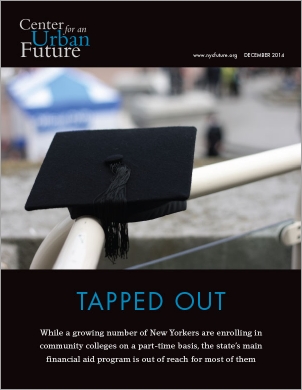 While a growing number of New Yorkers are enrolling in community colleges on a part-time basis, the state’s main financial aid program is out of reach for most of them.

This report was written by Christian González-Rivera and edited by David Giles and Jonathan Bowles. Additional research support from Barbara Wijering-van Wijk and Esther Kim. Design by Ahmad Dowla.

The report was funded by the Working Poor Families Project, a national initiative supported by the Annie E. Casey, Ford, Joyce and Kresge Foundations which partners with nonprofit organizations in 22 states to investigate policies that could better prepare working families for a more secure economic future.

General operating support for Center for an Urban Future has been provided by the Bernard F. and Alva B. Gimbel Foundation and Fund for the City of New York.

Editorial: Growing number of part-time students should be eligible for tuition assistance