New York City’s public libraries are serving more people in more ways than ever before, and have become an increasingly critical part of the city’s human capital system; but they have been undervalued by policymakers and face growing threats in today’s digital age.

Although this report includes a host of new data demonstrating how New Yorkers use libraries, the importance of the libraries cannot be measured with numbers alone. Interviews with community-based leaders make it clear that public libraries have a unique strength: No other institution in New York serves so many different people in so many different ways. 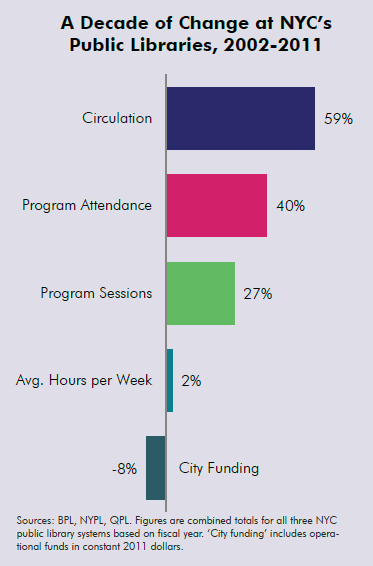 For instance, at a time when 37 percent of the city’s population is foreign born, around 60 percent of residents are either immigrants or children of immigrants and nearly a quarter of the population is less than totally fluent in English, the public libraries are an unmatched resource for assimilating these New Yorkers and giving them opportunities to succeed. Of the ten branches in the city with the highest circulation, six are in neighborhoods in which immigrants make up a disproportionate share of the population: Flushing, Queens Central (in Jamaica), Kings Highway, Elmhurst, McKinley Park and Fresh Meadows.

While nonprofit organizations and government offices also attempt to serve this population, libraries reach more of them and do it more effectively in large part because libraries are arguably the one institution that immigrants trust. Libraries offer English for those who are not native English speakers, preparation for the U.S. citizenship test and computer literacy classes, many in foreign languages such as Spanish, Chinese and Urdu. In Midwood, Brooklyn, the popular Kings Highway branch has two Russian speaking librarians who not only field questions about books but help both recent and older immigrants learn basic computer skills.

“There have been many immigrant waves in America’s history and many different institutions that helped them assimilate. In this age, I think libraries are the leading institution playing this role.”

“Libraries are an indispensable resource for immigrants,” says Madhulika Khandelwal, director of the Asian/American Center at Queens College. “There have been many immigrant waves in America’s history and many different institutions that helped them assimilate. In this age, I think libraries are the leading institution playing this role.”

Libraries are also a singularly important resource for seniors, an essential role in a city where the number of residents over the age of 60 grew by 12.4 percent during the past decade (compared to 0.2 percent for those under 60) and where the elderly population is expected to grow by 45 percent in the next 20 years. Older New Yorkers seem to be ever-present at branches across the city, in part because libraries provide a safe and convenient outlet for seniors to read the newspaper, send emails to relatives or just socialize in an environment that many see as more engaging than a senior center. Libraries are also increasingly the places where older adults go for resources they can’t find elsewhere as branches offer specialized courses for older New Yorkers in everything from basic computer skills and electronic tax filing to defensive driving and “Facebook for Seniors.”

“Libraries offer seniors the opportunity to flourish and stay active and engaged in their development,” says Tom Kamber, executive director of Older Adults Technology Services (OATS). “At a time when the city is rapidly aging, there really isn’t another institution that does that.”

The public library system is an unparalleled portal to the Internet for the many New Yorkers still on the wrong side of the digital divide. An incredible 2.9 million city residents don’t have broadband Internet access at home. Not surprisingly, there has been a huge increase in the number of New Yorkers who go to the city’s public libraries to get connected. Since 2002, the city’s three library systems have increased their total number of public access computers by 89 percent, with number of users rising just as fast or even faster. In the last five years alone, the number of computer sessions logged at public computers in the city’s libraries has grown by 62 percent, going from 5.8 million sessions in 2007 to over 9.3 million in 2011. At NYPL alone, attendance at technology programs nearly doubled from 2003 to 2012, going from 30,000 to 58,541.

“Libraries are often the only access to digital resources that are available at no cost in low-income communities,” says LISC’s Scott.

The libraries serve job seekers and provide a range of workshops and services for those who need to bolster their skills for an economy that no longer produces large numbers of decently paying jobs for those with only a high school diploma (or less). The intensive literacy and pre-GED courses that the libraries offer—along with the many informal educational opportunities they provide—is critical in a city where nearly 30 percent of the working age population, or 1.6 million people, currently lack a high school diploma and which has one of the lowest GED attainment rates in the country.

Libraries also complement the city’s public school system in a way that is often underappreciated. When school buildings are closed during the summer, on weekends and after the school day ends, the public libraries provide an alternative to the streets and offer a wide variety of programs for elementary and secondary school students, from early childhood reading sessions and reading groups to music lessons and one-on-one homework help. Libraries also have become a destination for students doing in-class research projects or simply looking for something to do after school. In Far Rockaway, for instance, a popular library center created to serve teens regularly teems with school-age kids who socialize after school and receive job readiness advice from youth counselors.

Finally, at a time when entrepreneurship is becoming increasingly important to the city’s economy, the libraries offer an array of useful resources for current and prospective business owners. Some branches, such as the Science and Business Library (SIBL) in Manhattan and the Business and Career Library (B&CL) in Brooklyn, provide free access to market research databases that would otherwise cost hundreds or thousands of dollars. Many branches operate as de facto incubators, providing a regular home to hundreds of businesses. And the libraries consistently offer programs that connect would-be entrepreneurs with small business assistance experts and mentors. Indeed, at least 250 small businesses have been launched by clients that were advised at SIBL by mentors from SCORE (Service Corps of Retired Executives).


The Future of Libraries

Giving Libraries Their Due

Despite drop in money, library attendance is higher than ever

Op-Ed: New York City lags far behind other cities in investing in its public libraries

As Use of Libraries Grows, Government Support Has Eroded

Startup News: Kickstarter and IndieGogo Show Off Their Metrics and Middle Schoolers Get Appy

Budgets Challenge Libraries, a ‘Point of Integration’ for Immigrants

New York Public Library: Why New Yorkers Are Rallying to Save It

What is a Library?

What Does the City’s Recovery Need? More Libraries

Letter to the Editor: For the Elderly, a Welcome Place to Meet

BK libraries striding toward the future with new technology

Brooklyn Public Library Capital Funding Woes: How Did Things Get So Bad?

New Report on Libraries Transforming in the Digital Age

Today’s Report: City’s Libraries Serving More People In More Ways Than Ever Before

U.S. libraries are critical to the 2020 Census

The Future of Libraries
WNYC

Despite drop in money, library attendance is higher than ever
amNew York

The Future of Libraries
WNYC

Despite drop in money, library attendance is higher than ever
amNew York