While more New Yorkers than ever are using the city’s public libraries, a significant share of the branches suffer from major physical defects and are poorly configured for how New Yorkers are using libraries today. This report provides a comprehensive blueprint for bringing these vital community institutions into the 21st Century.

The following are the Key Findings from Re-Envisioning New York's Branch Libraries.

View the Key Findings from the report.

View the charts and tables from the report. 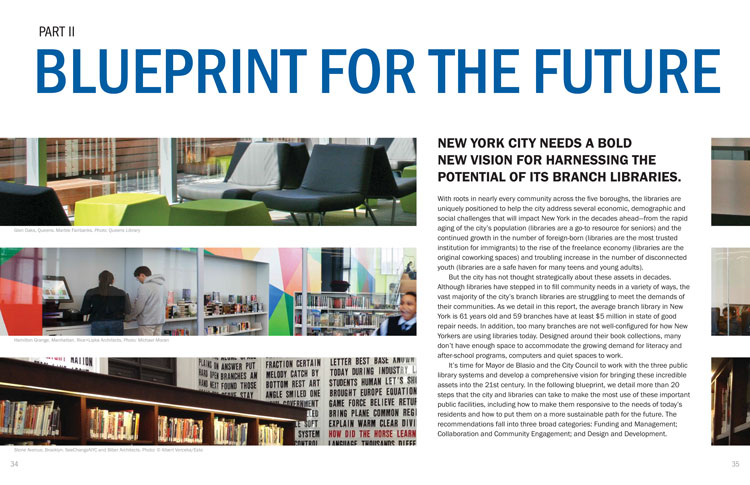 We recommend that the following steps be taken by city officials, library administrators and other stakeholders. Detailed recommendations can be found in Part II of this report.

This report was made possible by generous support from the Charles H. Revson Foundation.

Support for Center for an Urban Future has been provided by the Bernard F. and Alva B. Gimbel Foundation and the Fund for the City of New York.

From Patchwork to Network: Taking a wide view on infrastructure

After new report, councilman calls for unification of city libraries

The American Prospect, by Rebecca Nathanson, May 26, 2017

From Patchwork to Network: Taking a wide view on infrastructure
Library Journal

From Patchwork to Network: Taking a wide view on infrastructure
Library Journal